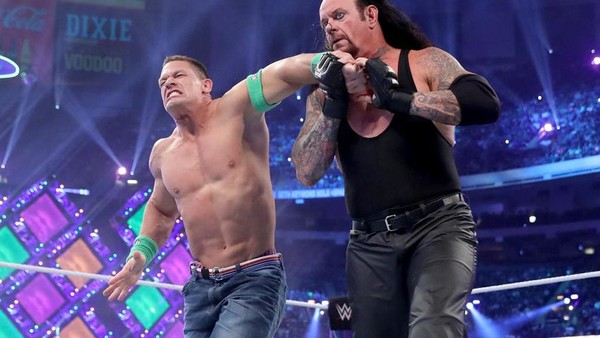 John Cena has hilariously revealed that he wore jean shorts in wrestling matches to stop WWE fans from “looking at my d**k.”

The 42-year-old WWE legend has predominately donned blue jean shorts during his illustrious career with the company.
Speaking on The Late Late Show with James Corden, Cena said that denim is a “safe play” and it doesn’t “blow the crotch out of denim.”

He explained: “If you look at my other options, it’s just underwear. I wanted to do some sort of street clothes because my persona was a tough wannabe rapper kid from the mean street of West Newbury.

“Tough to do that in your underwear. 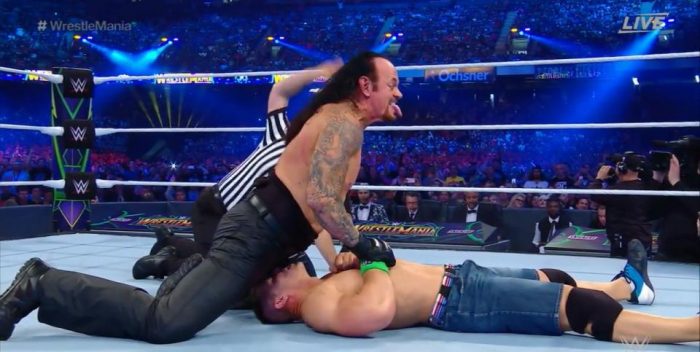 “I chose denim because you don’t blow the crotch out of denim.

“I tried cargo pants, and in front of the world a few times […] here I am trying to put my life on the line with the superstars I’m having a match with, and everyone’s just looking at my d**k.

“So denim’s a safe play.”
Cena, who has been reduced to sporadic WWE appearances since his rise to stardom in Hollywood, was left red-faced after his ‘accidental boner’ against The Undertaker at WrestleMania 34 in 2018.

The ‘Dr of Thuganomics’ later admitted it was something that was out of his control, saying it is “what the body does” and he “can’t be blamed for that.”


Cena hasn’t made an appearance on WWE TV since 2019, but the wrestling legend has confirmed that he’ll “be in the neighbourhood” for WrestleMania 36 in April.

He said on Jimmy Kimmel Live: “I know we have a small, large event called WrestleMania around the corner.

“It just so happens to be in Tampa. That’s kinda where I live, so I’ll be in the neighbourhood.

“Suicide Squad should be done. But it’s not like I call someone up and be like, ‘I wanna be in WrestleMania.’ Those spots are very coveted.

Is WWE Building Toward Roman Reigns Vs. Brock Lesnar Once Again?

WWE News: Roman Reigns gets a response from Goldberg after mocking his pre-match ritual