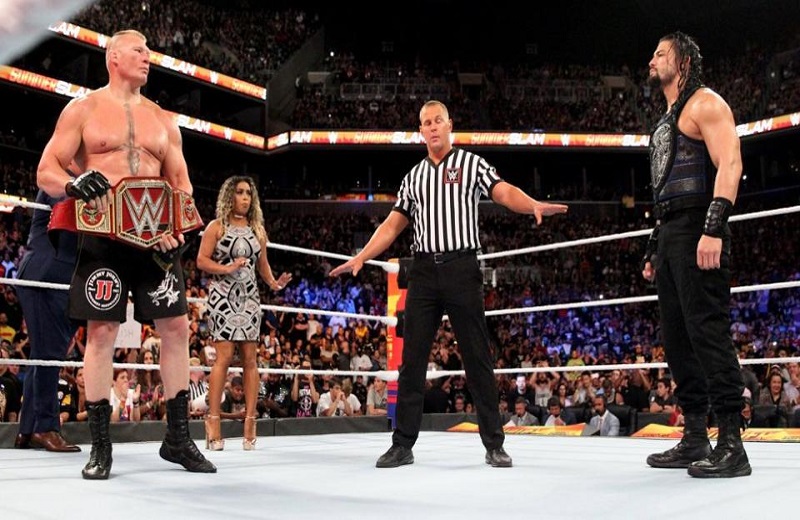 WWE typically has its WrestleMania main event lined up well in advance–as fans saw last year when Becky Lynch and Ronda Rousey were on a collision course to face off at the company’s biggest pay-per-view–but this year, the WrestleMania 36 main event isn’t so obvious.

All of the changes brought upon by superstar retirements, the WWE Draft and a slew of heel and face turns have resulted in an unclear WrestleMania path for many of WWE’s top superstars. That makes you wonder: Is WWE set to go to the well one more time?

Barring something unforeseen happening, there are probably fewer than 10 superstars who have a legitimate shot at main eventing WrestleMania 36 in April 2020: Rousey, Lynch and Charlotte Flair in the women’s division and names like Seth Rollins, Roman Reigns and Brock Lesnar in the men’s division top that list. Let’s focus on those last two, shall we? Because the stars are aligning for “The Beast” to take on “The Big Dog” at WrestleMania 36–yes, for a third time.
Consider this: Lesnar is the current WWE Champion and the clear-cut biggest star on Raw. The widespread belief is that Lesnar, as typically seems to be the case, will hold that WWE title all the way until WrestleMania at the very least, with the idea being that he is clearly the top attraction on the red brand. So, why might he be on track for another match with Reigns? Well, Reigns is the clear betting favorite to win the 2020 Royal Rumble, and with the possibility remaining that Wyatt will hold the Universal title well beyond WrestleMania 36, WWE’s reported plans to do Wyatt vs. Reigns certainly are no lock because WWE isn’t going to build up Reigns just to have him lose to Wyatt.

While there’s nothing to suggest that Lesnar will lose the WWE title anytime soon, there is plenty to suggest that Reigns will reenter the world title picture in the near future, likely just in time for WrestleMania, and that he could cross paths with Lesnar, who will be in the Royal Rumble despite still being WWE Champion. Lesnar’s inclusion in that match is reportedly expected to set up Lesnar’s Mania match, and you have to wonder if Reigns will be the one who eliminates Lesnar even though that doesn’t exactly sound intriguing:

Source says WWE is doing this Lesnar in the Rumble angle as a way to set up Brock’s Mania matchup. Which could signal its against someone from SD or NXT as Heyman mentioned a few times last night. Opens up a world of possibilities.


It’s no coincidence, after all, that ever since he moved to SmackDown back in April, Reigns–once a mainstay in the world title scene on Raw–has been nowhere near it on SmackDown. One reason for that is that Reigns wasn’t initially wrestling a full-time schedule after working his way back into the mix following a successful battle with cancer. Another reason, however, is that WWE is clearly waiting for the right time and place to have Reigns reinsert himself into WWE’s world title picture.

At WrestleMania 35, WWE eased Reigns back in with a midcard match against Drew McIntyre. Since then, Reigns’ reduced role has actually worked out wonderfully for him as the boo birds have noticeably quieted now that he is no longer receiving an overbearing push. In fact, one could argue that Reigns is more universally popular now than he’s ever been. But by the time Royal Rumble rolls around, Reigns will have been back for nearly a year, at which point he’ll likely be ready to pursue a world title again, especially given the fact that he never lost the Universal title, which he forfeited in October 2018 after his leukemia returned. There’s a very easy story to tell here: Reigns battling back from cancer to beat his longtime arch-nemesis to win the WWE title and re-cement himself as the face of WWE.

It’s somewhat similar to previous stories WWE has tried to tell with Lesnar and Reigns as “The Big Dog” has tried to slay “The Beast” on several occasions and failed to do so more often than he succeeded. While a potential rehashed rivalry between Reigns and Lesnar really isn’t one that sounds all that exciting given how much the two stars have feuded in the past, it may actually be somewhat different this time around if and when it happens. Reigns is more popular than ever, and given that he really has never had an extended title reign and hasn’t had a reign at all since returning from battling leukemia, it’s likely that fan reaction would be much more positive than it has been in the past. Certainly, it would be the lesser of two evils for Reigns to defeat the loathed Lesnar than the beloved Wyatt.

While it might not be the best idea for WWE to rekindle a feud that WWE fans have seen off-and-on for the past four years, that won’t prevent WWE from doing it again–for better or for worse and whether Reigns wins the Rumble or not.