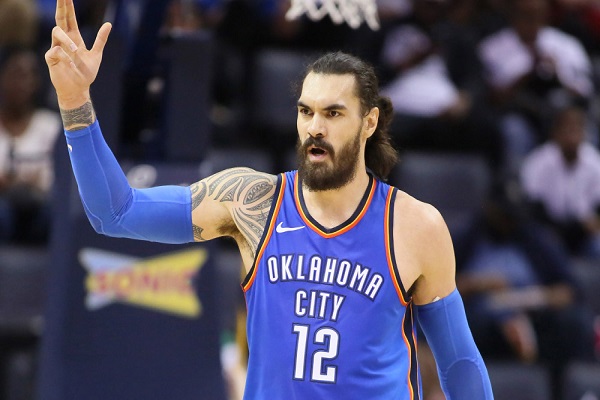 Reports have says that the Thunder will be willing to trade away the remaining two years of Steven Adams’ contract. The Oklahoma City Thunder are looking to create cap space this summer. OKC’s All-Star duo of Russell Westbrook and Paul George are set to earn a combined $74.4 million.

Adams has continued to perform very well during the 18-19 season, with the average of 13.9 points, 9.5 rebounds and 1.5 steals per game, but the Kiwi is the team’s third highest earner and is owed $52 million over the next two years.

Earlier this week, it was revealed that the Celtics were interested in bringing the 25-year-old to Boston, and Matt George of the ‘Locked on Kings’ podcast is reporting that the Sacramento Kings are also interested in acquiring the center:

I have heard, from a couple of sources now, that the Kings reached out, as expected, they asked and inquired not just about Steven Adams, I believe it was the 23rd pick. … They asked what Oklahoma City’s price tag or asking price would be for a package like that.

Evidently, Adams is set to receive lots of interest in from now on, and if the Thunder are serious about reducing luxury tax, Adams is unlikely to return to Oklahoma City for the 19-20 season. With Nerlens Noel also likely to leave in free agency, the Thunder face a major task to rebuild their center options this summer.