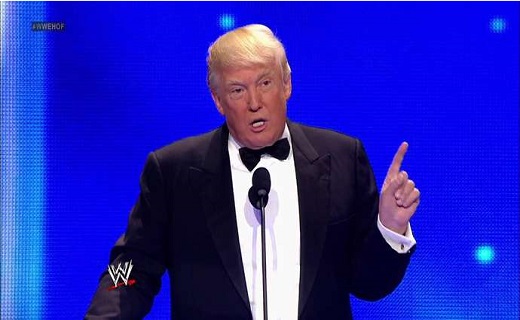 Reports by Sportskeeda says, FOX has approached WWE about trying to make a Trump appearance on SmackDown happen, when the show jumps from USA to FOX on October 18. For now, Trump has reportedly not been personally approached by either WWE or FOX about the idea.

A recent report suggests that the FOX network wants President Donald Trump to appear on an episode of WWE SmackDown this fall, after the show leaves USA. As weird a prospect as the leader of the free world appearing on a professional wrestling program might normally be, it’s important to remember that Trump has a long history of doing business with WWE. He’s been friends with WWE boss Vince McMahon for decades, and WrestleMania events emanated from Atlantic City’s now-closed Trump Plaza hotel and Casino in both 1988 and 1989.

Trump would make a handful of quick appearances at WWE shows over the years, before finally becoming part of the action himself in 2007. Trump would face off with McMahon – albeit via wrestler proxies – at WrestleMania XXIII in Detroit, as part of the “Battle of the Billionaires.” Trump’s proxy, Bobby Lashley, would defeat McMahon’s proxy, Umaga, leading to the former Apprentice host shaving McMahon bald with help from special referee “Stone Cold” Steve Austin. Of course, Austin would hit Trump with the Stone Cold Stunner a few minutes later, but such are the perils of being in the ring with the unpredictable Texas Rattlesnake.

Trump would go on to be inducted into the celebrity wing of WWE’s Hall of Fame in 2013 by McMahon himself, but to say things have changed in the years since would be an understatement. Trump has gone from TV host and media personality to the U.S. commander-in-chief. Yet,

For now, WWE has yet to officially comment on this report, and knowing them, they probably won’t anytime soon. With that in mind, fans shouldn’t get too excited – or concerned, depending on their feelings towards Trump – about the idea of what the POTUS might do in a WWE return. The last time Trump appeared on WWE TV was for a short 2009 storyline in which he “bought” Raw from Vince McMahon, only to quickly sell it back to McMahon for twice what he paid for it. The story was brief, but led to an interesting experiment in which Raw was broadcast completely commercial free.

Trump’s ties to the McMahon family have notably continued since his WWE Hall of Fame induction, as Vince’s wife – and former WWE executive – Linda was chosen to head up the Small Business Administration under Trump, although she left that post in 2019. However, she’ll still be working to help Trump’s 2020 re-election campaign, so clearly relations between the two families remain friendly.