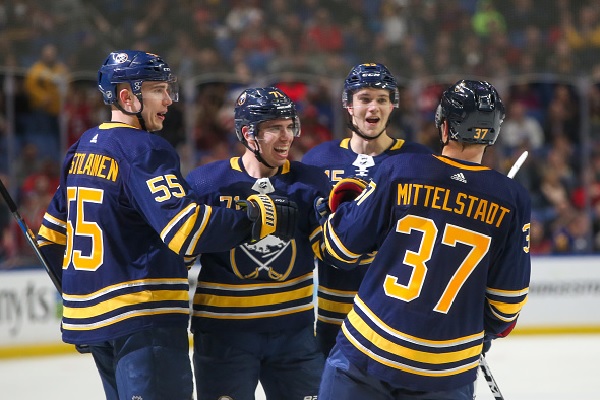 “We continue to interact with ‘Risto,’ we’re continuing to try to set this team up where we’re putting Risto in positions to have success,” Botterill said. “And, yeah, he wants to win, we also want to put him in a situation where he plays very well.”

The Sabres have needs at right wing and center, and the 24-year-old defenseman has been mentioned in trade rumors as the player with the most value to fetch that help. Ristolainen this month reportedly did not commit to being with the Sabres when training camp opens.

“I cannot say anything other than the fact that on the 12th of September, I will be at one of the NHL team’s training camps,” Ristolainen said in remarks translated by the Buffalo News.

The Finland outlet MTV Sports said Ristolainen wanted to keep his conversations with the Sabres private.

Ristolainen has averaged a little more than 24 minutes of ice time per game in his six seasons in the NHL and has not played less than that since his second season. The Sabres have finished no higher than sixth in the eight-team Atlantic Division in those seasons, and that was last season, which was their eighth straight season missing the Stanley Cup Playoffs, the longest active drought in the NHL.

Ristolainen, the No. 8 pick in the 2013 NHL Draft, has three years remaining a six-year contract worth $5.4 million per season he signed Oct. 11, 2016 under general manager Tim Murray.

Ralph Krueger said he spoke with Ristolainen after he was hired as Sabres coach May 15. It was a long call and the coach listened to what the defenseman had to say. With training camp a few weeks away, Krueger said he is planning for his first season in Buffalo with the mindset that Ristolainen will be there.

“I really think it’s important for me to listen when the players are talking to me, and the messages I received from him was, if I’m his coach, he’s willing to do this and that and look for the next level of Rasmus Ristolainen,” Krueger said. “That’s my job right now. He’s in our lineup, he’s on our roster, and I look forward to coaching him.”

The offseason additions of Colin Miller and Henri Jokiharju, in separate trades with the Vegas Golden Knights and Chicago Blackhawks, gives the Sabres five right-shot defensemen who could play in the NHL. Ristolainen, Brandon Montour and Zach Bogosian are the others, although Bogosian could miss the start of the season after having hip surgery in April.

“That’s what we’ve tried to do with some of the acquisitions: Add depth to our defense. Add competition to our defense but also add depth,” Botterill said. “At the end of the regular season, [we] talked a lot about forwards and having four lines that can score. But it’s the same thing from a defense standpoint. That’s why we’ve tried to add [to] our group, to ease some of the responsibility from certain players.”