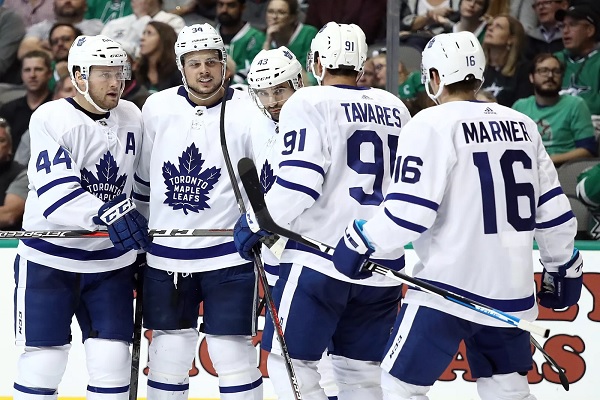 It’s time for some more NHL rumours to start off your Tuesday. Teams are still working on getting players to fit under the $81.5 million salary cap. There’s also plenty of long-term planning going on. Today’s NHL rumours are focused on the New Jersey Devils, Toronto Maple Leafs and Philadelphia Flyers.

All rumours are taken from the original source and are subject to change.
NHL Rumours
New Jersey Devils

Rumour: Scott Billeck of NBC Sports speculated that all the Devils activity will convince former Hart Trophy winner Taylor Hall to stay. David Pagnotta of The Fourth Period suggested that Hall had no interest in staying in Newark.

New Jersey has been busy with picking up P.K. Subban and adding top pick Jack Hughes in the draft. General manager Ray Shero has also made other moves like signing Wayne Simmonds and acquiring Nikita Gusev. Shero may also have a couple more moves left in him this summer.

If Hall doesn’t sign, could a return to Edmonton be possible? Kurt Leavins of the Edmonton Journal tossed around such an idea in his most recent column. Hall said the bad blood of the New Jersey trade is largely gone and he’d love to play with Connor McDavid again. However, Edmonton would have to move mountains of salary to make that happen.

My Latest at The Cult of Hockey – Can Evan Bouchard emerge from Edmonton #Oilers training camp with an NHL job?: 9 Things https://t.co/bHL0s81Q0c

Analysis: New Jersey currently has $8 million in cap space, but Hall may require over $10 million to stay. Both sides have been a mum about a possible extension, but another big season could make Hall the hottest name on the market.

The Devils have made a lot of deals, but Hall could be lured by the idea of playing for big money and a championship.

However, Hall is probably not likely to return to Edmonton to reunite with the Oilers. Edmonton has $57 million invested in just 10 players for the 2020-21 season. Hall won’t fit unless the Oilers tear down their roster and trade a star or two.
Toronto Maple Leafs

Rumour: Steve Simmons of the Toronto Sun said that Jake Gardiner has been quiet on where he’ll play next season. There’s been some buzz that the UFA defenceman could make a surprise return to the Maple Leafs this season.

Some think there’s a handshake agreement and that he’ll return once Mitch Marner signs with the club.

Analysis: Gardiner does have question marks because of back issues, but it’s surprising that he hasn’t been signed to a new deal. Many teams have been linked to the American blueliner, but no one has pulled the trigger on a new deal.

Toronto general manager Kyle Dubas has a tall order getting Marner and Gardiner to fit under the salary cap. Many have thought that the 29-year-old was as good as gone, but there’s still a small chance he could return. Gardiner will likely have a home by the time training camp is here, but it’s still a mystery where he’ll end up playing.
Philadelphia Flyers

Rumour: Jason Myertus of 97.5 The Fanatic in Philadelphia gave an update on the deals for Ivan Provorov and Travis Konecny. He said Provorov is on hold due to the logjam of restricted free agents. The host said that no one wants to jump the gun and sign first before some of the big names ink deals.

Myertus stated the Konecny will likely take a bridge deal of two or three years at $4.5 million. This will be a chance for the London, Ontario native to get himself a bigger contract and a longer-term.

I checked in with someone in the know and was told Konecny is getting very close. Likely a bridge deal around 2–3 years about 4.5AAV. Provorov is stalled completely because the RFA market is also stalled. Agents and players playing the waiting game and no wants to sign first. https://t.co/YZeqPtTWXi

Analysis: The lack of RFA deals has things slowed to a crawl in August. Deals will start to get done once someone like a Marner or a Brock Boeser inks a deal. These slowdowns are not affecting every team in the league.

Konecny has scored 24 goals in the last two seasons and is staking a claim for a long-term deal. He’s been one of the most consistent scorers on a team that will have another new coach in Alain Vigneault.

Philadelphia currently has $13 million in cap space according to CapFriendly.