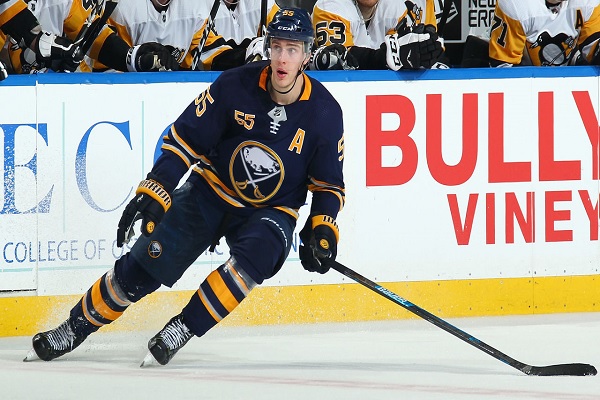 Does Ristolainen want out of Buffalo?

Buffalo Sabres defenseman Rasmus Ristolainen’s been a fixture in the NHL trade rumor mill for months. The club’s recent acquisitions of right-side blueliners Colin Miller and Henri Jokiharju stoked speculation the 25-year-old Finnish rearguard could be on the move soon.

In a recent interview with Finland’s MTV Sports, Ristolainen implied he could seek a change of address. Citing a translated version, The Buffalo News’ Lance Lysowski reported the defenseman wished to keep his discussions with management private. He added he couldn’t say anything other than he’ll be “at one of the NHL team’s training camps.”

Ristolainen also indicated he’s found recent seasons tough and hasn’t been able to enjoy hockey. His comment seemed to echo that of former Sabres center Ryan O’Reilly, whose remarks in April 2018 about losing his love of the game contributed to his trade last summer to the St. Louis Blues.

Perhaps Ristolainen was merely misquoted or his statement was lost in translation. Then again, maybe seeing a former teammate hoisting the Stanley Cup in June has him hoping for a similar outcome with another club. Whatever the reason, his remarks ensure he’ll remain a fixture in media trade chatter as training camp approaches next month.

Several clubs, including the Detroit Red Wings, Edmonton Oilers, and Winnipeg Jets, could use a top-four RHD like Ristolainen. Cap Friendly indicates he carries an affordable salary-cap hit of $5.4 million and lacks no-trade protection through 2021-22, giving Sabres general manager Jason Botterill plenty of options if he puts Ristolainen on the trade block.

The Sabres sit $1.059 million above the $81.5 million salary cap but don’t expect Botterill to move a valuable asset like Ristolainen simply to shed salary. Last week, he indicated he doesn’t have to make a trade to become cap compliant. He could place an injured player such as Zach Bogosian on long-term injury reserve to start the season or demote someone on a one-way contract.
Kreider still facing an uncertain future in New York

The Rangers’ need to become cap-compliant following the Panarin and Trouba signings served to ramp up anticipation Kreider could become a cost-cutting casualty. Instead, the Blueshirts bought out the final two years of defenseman Kevin Shattenkirk’s contract.

In a recent interview with NHL.com’s Dan Rosen, Rangers president John Davidson said he expects Kreider will be in training camp next month. However, he and GM Jeff Gorton suggested it was difficult to promise he’ll receive a new contract.

Rosen also noted both executives wouldn’t rule out trading Kreider even if the Rangers were in playoff contention. He thinks there’s a chance the winger could be dealt before next February’s trade deadline.
Latest on the Flames

With over $7.7 million in cap space and RFA forwards Matthew Tkachuk and Andrew Mangiapane to re-sign, it’s assumed the Calgary Flames will shed some salary via trade. The annual average value on Tkachuk’s next contract could reach $9 million.

It was assumed defenseman T.J. Brodie would be traded to free up some salary. He’s a year away from UFA eligibility with a reasonable $4.65 million cap hit and a limited no-trade clause.

Last Friday, Sportsnet’s Eric Francis said the Flames are shopping Brodie but a team source claimed they’re having a difficult time trading him. Francis wondered if they might have to package Brodie with a young player like Mark Jankowski to get a deal done.

Since then, the Flames revealed promising d-man Juuso Valimaki recently suffered a knee injury and will be sidelined for the foreseeable future. That should take Brodie off the trade block for now. The Athletic’s Scott Cruickshank suggests winger Michael Frolik could be moved to free up the necessary dollars to re-sign Tkachuk and Mangiapane.