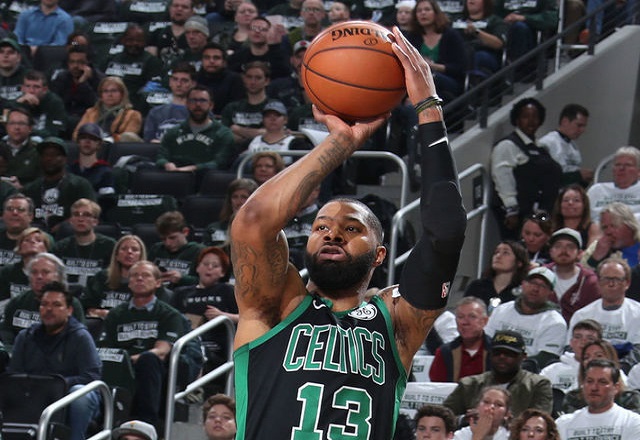 According to a report from ESPN, Forward Marcus Morris is reconsidering the two-year, $20 million deal he committed to with the Spurs and may sign with New York instead,

The Knicks are expected to have more cap space than originally anticipated because they’re reworking the two-year, $21 million contract they agreed to with wing Reggie Bullock, according to the report. Bullock’s “fitness to play a full season in 2019-20” is in question, but both sides are “motivated to find an agreement with new terms,” the report says.

In a brief conversation with ESPN, Bauman was complimentary of how the Knicks handled this emerging situation with Bullock. He cited how accommodating ownership, front office and medical staff had been in dealing with new issues facing deal: “First-class throughout,” Bauman said. https://t.co/vFoTxswQpy

Morris averaged 13.9 points and 6.1 rebounds while shooting 37.5% from 3-point range for the Celtics last season. The Knicks have offered him a one-year, $15 million contract, according to Yahoo Sports.

he Knicks, meanwhile, were reportedly targeting Kyrie Irving and Kevin Durant this summer, but both stars ended up signing with their cross-town rivals, the Nets.

Yahoo Sources: New York Knicks have a one-year, roughly $15 million offer on the table for Marcus Morris who is considering reneging on his two-year, $20 million agreement with San Antonio.

“Our plan wasn’t to create $70 million in room to go after free agents this summer,” Knicks president Steve Mills told the Undefeated last month. “Our plan was to organically build this team through teamwork, drafting well, getting high-character guys that want to compete. The (salary cap) space was a byproduct of that.”

The Knicks also selected former Duke star RJ Barrett with the No. 3 pick in the 2019 draft.