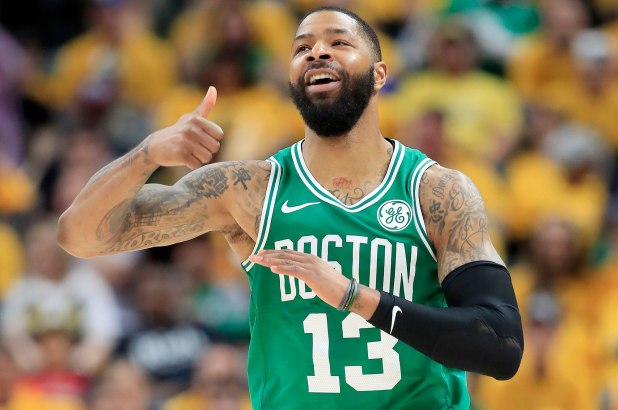 The Knicks have added one more player to their roster.

New York has signed Marcus Morris to a one-year, $15 million contract, according to a report from The Athletic, which cites unidentified league sources.

Morris, 29, originally committed to a two-year, $20 million deal with the Spurs earlier this month. But, he was reportedly reconsidering that contract, leading San Antonio to withdraw the offer, according to ESPN.

Morris averaged 13.9 points and 6.1 rebounds while shooting 37.5% from 3-point range for the Celtics last season.

“I had to make this decision based on the best situation for me and my family,” Morris told The Athletic. “This is no knock on the Spurs. I have respect for them.”

The Knicks had more cap space than originally anticipated because they’re in the process of reworking the two-year, $21 million contract they agreed to with wing Reggie Bullock, whose “fitness to play a full season in 2019-20” is in question, according to an earlier report from ESPN.

ESPN Sources: The New York Knicks and free agent Reggie Bullock are re-working an original two-year, $21M deal, with both sides motivated to find an agreement with new terms. Agent David Bauman and the Knicks are re-evaluating Bullock’s fitness to play a full season in 2019-20.

New York is still optimistic it will add Bullock, according to a report from SNY.

The Knicks were reportedly targeting Kyrie Irving and Kevin Durant this summer, but both stars ended up signing with their cross-town rivals, the Nets.

“Our plan wasn’t to create $70 million in room to go after free agents this summer,” Knicks president Steve Mills told the Undefeated last month. “Our plan was to organically build this team through teamwork, drafting well, getting high-character guys that want to compete. The (salary cap) space was a byproduct of that.”

The Knicks also selected former Duke star RJ Barrett with the No. 3 pick in the 2019 draft.