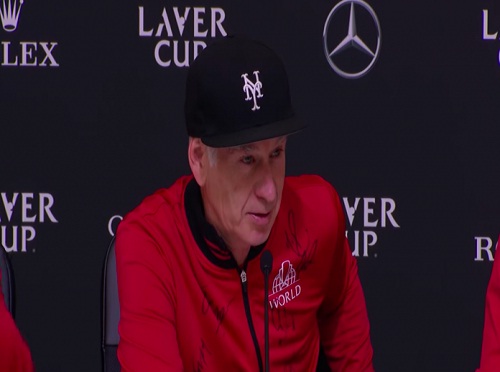 After losing their Laver Cup title by a tiebreaker, Team World’s captain, John McEnroe was dispirited. He was apparently irked after having a long Sunday and he made a sardonic gesture by fuming on a reporter in the midst of the post-match press conference of Laver Cup 2019.

Questions were bouncing upon the American skipper related to the incidents which occurred throughout the day. “You have got other people here don’t ask me any more f***ing questions,” McEnroe blasted cynically. “You first asked me a question in 1978 I think in Bologna, ask somebody else a question. Go and ask somebody else something.”

Post this, the journalist turned to the vice-captain of Team World, Patrick McEnroe and continued the press conference.

John McEnroe has been the captain of Team World over the past three editions and his team has been experiencing a defeat in all three events. This year they were just a tiebreaker away from clinching the cup, but Milos Raonic couldn’t outdo the young contender of tennis, Alexander Zverev in the final tiebreaker.

Team Europe’s captain, Bjorn Borg reflected his thoughts on the Laver Cup concept of tennis. “I will say it like this. First of all, this is the best thing that has happened to tennis in my opinion, the Laver Cup,” Borg said. “Regarding the rules, unfortunately, one of our players got injured and you can always complain but it’s the rules. We are sitting here today and we won. Simple as that.”

The fourth edition of the Laver Cup will be held in Boston, USA from 25 September to 27 September 2020. Due to the Tokyo Olympic Games, the US Open 2020 will take place in the first two weeks of September. Followed by a two-week break, the Laver Cup 2020 will get underway during the last weekend of September.

Team captains Bjorn Borg and John McEnroe will reprise their roles for the Laver Cup 2020 edition.