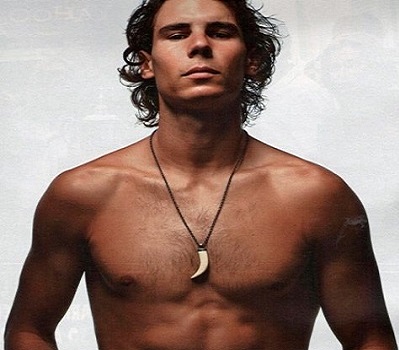 Just In : See Hot Recent Photos Of Rafael Nadal And Achievement That People Are Talking About..

Rafael Nadal, popularly called the King of Clay, is the greatest single-surface expert that tennis has ever seen, and one of the greatest players overall.

With 17 Grand Slams to his name, Nadal is second only to Roger Federer in the list of all-time Slam leaders. More strikingly though, Nadal has won a staggering 11 French Open titles, making him by far the most successful player ever at a single Major.

While he started out as a nemesis to arch-rival Federer, regularly defeating the Swiss ace on all surfaces, Nadal has over the years developed into an all-court great in his own right.

In his younger days Nadal was purely a defensive counterpuncher, relying on his patience, speed and endurance to outlast his opponents. For that reason, most of his early success came on clay – which rewards defense more than offense.

In recent times though, Nadal has become a more offensive player, standing closer to the baseline and taking the initiative in points as soon as possible. That has made him a significantly bigger threat on non-clay surfaces, and has helped him win big titles on grass and hardcourts too.

Nadal’s forehand is a legendary shot and is his single biggest weapon, giving nightmares to all his rivals – most notably Federer. The Spaniard uses an extreme western grip on the forehand, which enables him to impart tremendous topspin and get the ball bouncing up to the shoulders of his opponents. Since he is a left-hander, his stock shot – the crosscourt forehand – goes into the backhand corner of right-handed players, and that makes it difficult for them to do much with the reply. The Nadal forehand is particularly difficult to deal with for players with single-handed backhands.

His backhand is very solid too. While he used that wing mainly as a rally shot early on, in recent times he has started flattening it out, turning it into another lethal weapon. His crosscourt backhand is one of the best in the world, and many attribute that to the fact that he is ambidextrous; he can hit equally hard off both sides.

Nadal’s foot speed and court coverage rank among the best in the history of the sport. Players often blast missile groundstrokes into the corners, thinking they have earned a winner, only for Nadal to come sprinting out of nowhere and make an astonishing get. By forcing his opponents to keep hitting one extra shot, he elicits numerous errors out of them, which is especially useful on clay.

Nadal’s serve is one of the very few weak parts of his game; it lacks the speed and venom that many other top players possess. However, his lefty slider out wide in the ad court gives him a natural advantage, as he can make the ball move away from the opponent’s backhand on most break points.

Nadal doesn’t approach the net a lot, but he has soft hands and finishes points with crisp volleys whenever he has the chance. He has a brilliant overhead smash; many regard it as one of the best in history.

Nadal has created several records over the years, and not just on clay. Here are the most noteworthy of those:

– Most titles at a single Grand Slam: 11 (French Open)

Nadal was born in Manacor, Mallorca, and has lived there ever since. He was coached by his uncle Toni since the age of 3, and the two only parted ways in 2016 – after which Nadal appointed Carlos Moya as his coach.

It was Toni Nadal who advised his charge to play left-handed, as he (rightly) believed that would give Rafa an inherent advantage on the court. Toni’s punishing training methods have also been widely credited for making Rafa such a disciplined and focused player.

Nadal comes from a sporting family, and has athleticism in his genes. Toni was a tennis professional in his youth, and Rafa’s other uncle Miguel Angel Nadal played professional football, even representing FC Barcelona. Nadal himself is an avid football fan, being a devoted supporter of Real Madrid FC.

Nadal’s girlfriend goes by the name Xisca Perello; the two have been dating since 2005.

Nadal’s rivalry with Federer was what defined the Spaniard’s career early on. His dominance over the Swiss was the major talking point of the tennis world in the 2000s; Federer swept past almost every other opposition he encountered with ridiculous ease, but couldn’t figure out how to beat Nadal.

The Federer vs Nadal rivalry reached its zenith at the 2008 Wimbledon final, where Nadal finally achieved his dream of winning Wimbledon after a titanic battle that lasted 4 hours and 48 minutes. He has maintained an upper hand in the head-to-head count ever since.

Nadal has also crafted a historic rivalry with Novak Djokovic. The two have played each other numerous times, with a fairly even split of matches. The Nadal vs Djokovic rivalry is best remembered for the grueling battles of endurance they have engaged in, most remarkably the 2012 Australian Open final which lasted nearly 6 hours. Their 2018 Wimbledon semifinal is another match that is widely considered one of the greatest matches of all time.

Nadal’s ability to fight till his last breath is what has made him such a cult figure in the sport. Despite being pitted against legendary shot-makers like Federer and Djokovic, he has fought for every point and every match like his life depended on it, which has enabled him to turn the tables on them. He has legions of fans who cheer wildly whenever he gets into an epic five-setter, and he wins most of those – his recent gladiatorial victory over Dominic Thiem in the US Open 2018 quarterfinal being a good example.

Nadal’s game has been revolutionary, especially his forehand. Nobody had ever seen a player use such a ridiculous amount of topspin before Nadal arrived on the scene. His ‘banana’ shots that curve into the court because of the revolutions he imparts on the ball are roundly eulogized.

Nadal’s claycourt prowess and records are the stuff of folklore; no player, male or female, has ever dominated a single surface the way Nadal has. For more than a decade, Robin Soderling was the only player to have ever defeated Nadal at Roland Garros; it was only in 2015 that Djokovic finally proved to the world that Nadal wasn’t invincible in Paris. But that was just a minor blip, as Nadal rebounded to add more French Open titles to his kitty, thus establishing once and for all his ‘King of Clay’ status.

Nadal is also a shining example of how to overcome adversity and physical limitations. He has suffered numerous injuries throughout his career – the knee injury is chronic – but has fought them all off with grit and determination. He has proven wrong all those who doubted his longevity; despite having a physically demanding playing style, he is still ruling the roost after going past the age of 30.