Daniil Medvedev, the world No. 4 from Russia, has become known for his ability to break his opponents’ brains and the world No. 1 – who has done similar to his victims throughout the years – quickly ran out of answers and momentum as he slumped to a 6-3 6-3 defeat in an hour and 21 minutes.

Djokovic, who has won this tournament on five separate occasions, now faces a shootout with Alexander Zverev to try and book his spot in the semi-finals. Should he progress he’ll face Dominic Thiem.

The first six games of the match were of the highest calibre, with both demonstrating their phenomenal athleticism in a series of gruelling rallies, but the world No. 1’s serve was broken, his spirit soon followed suit. 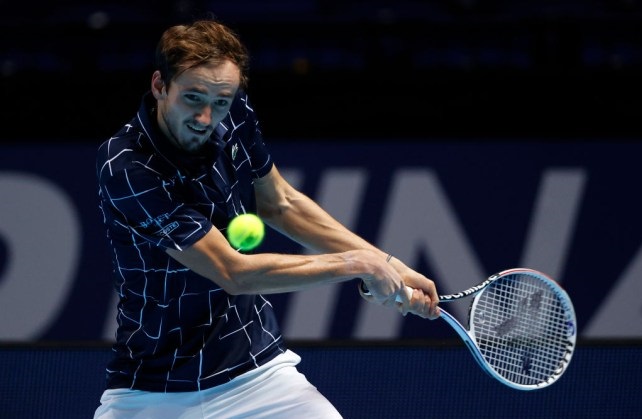 It’s the second time in three matches that Djokovic has surrendered in a straight sets defeat and he will no doubt have been concerned by his abject serving performance.

He was broken three times in the match and hit three double faults in a single game to gift Medvedev the first set.

That’s not to take anything away from the Russian, who is nicknamed ‘octopus’ as a tribute to the reach of his tentacles.

Medvedev was at his flawless best, giving nothing away for free and constantly applying pressure to make the Serb crack.

He is on a seven-match win streak after winning the Paris Masters 10 days ago. ‘Always, I like to play Novak, first of all because he is one of the greatest champions in the history,’ said Medvedev in his on-court interview.

‘When I was 8 years old, I was already watching him on TV winning grand slams, he was still young.

Medvedev had the first chances to strike in the third game of the match but was thwarted by the world No. 1, who saved the second of two break points from 15-40 in an exhausting 30-shot rally.

He finally found a way through at the fifth time of asking. After saving two more break points in the seventh game of the set, Djokovic finally cracked under relentless pressure from the world No. 4 from Russia.

A horror service game from Djokovic followed – the top seed hit three double faults – and he tamely conceded his fourth game in a row and the set after 48 minutes.

Things went from bad to worse early in the third. A lacklustre Djokovic conceded another service game as Medvedev won his sixth game on the trot.

Djokovic did craft a break point – his first of the match – in the next game but Medvedev held to take his streak up to seven. 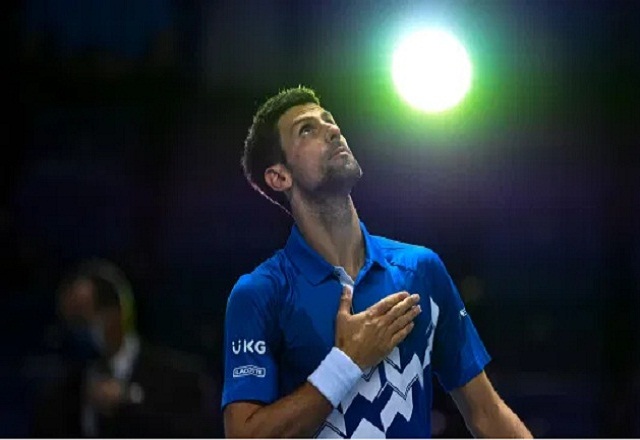 Djokovic, 33, did end that run but there was no way back as Medvedev comfortable moved into the semi-finals.

He will face Diego Schwartzman – who was earlier beaten in three sets by Alexander Zverev – in a dead rubber on Friday. He will face either Rafael Nadal or Stefanos Tsitsipas in Saturday’s semi-finals.