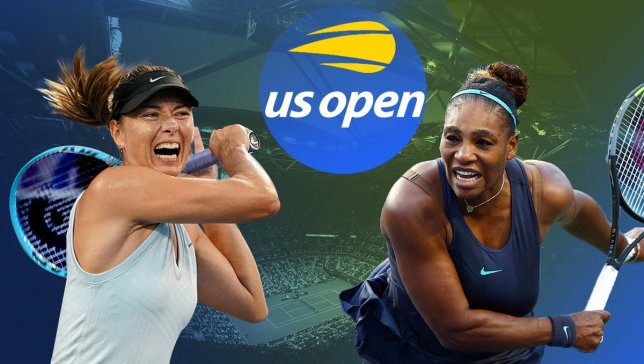 A double fault is not a good way for Sharapova to start this game. She’s trying – and failing – stay in the match as the American takes a 0-30 lead. The Russian makes it 15-30 and goes for a huge backhand that falls just in – according to review. Still 15-30.

Williams just keeps getting it back, forcing Sharapova to hit wide. The American has two match points. And she only needs one, the Russian hitting a backhand too long once again.

Williams has swept Sharapova away in this match.

A great rally ends with Sharapova smacking down a cracking backhand into the corner. Williams quickly levels with a strong serve but then sees her forehand go long. 15-30.

Williams is under pressure on the serve – but responds with an ace. At 30-30, Williams overhits a backhand and Sharapova has a chance to break for the first time. Oh dear. Sharapova goes for a winner with the backhand, but goes well wide. Deuce.

But another superb return from Sharapova hands the Russian another chance to break. But Williams is having none of it, making it deuce with another strong serve. The Russian wins a review on a serve and gets a chance to break. Can she take it? No. Williams hits to her backhand and Sharapova can only find the net. Again she hits a return into the net, and Williams has the chance to hold. Another big serve wraps up the game.

Williams hammers back a cracking return on the first serve. And then Sharapova hits long once again, making it 0-30. The Russian claws back a point but Williams is on top, powering back a backhand that Sharapova can’t return.

Williams has two break points – and only needs one. A forehand lands just in while Sharapova’s effort goes long. Williams secures another break.

Can Williams buold on her lead? Sharpova digging deep to try to prolong this match. Williams hits a backhand just wide after a good rally, but then Sharapova overcooks a backhand to make it 15-15. Again the Russian battles to stay in the game – she returns well and Williams hits wide. Then the American hits a wild forehand and Sharapova has two break points.

Williams saves one, then salvages the next with a wonderful passing backhand shot. Unlucky for Sharapova, who had just returned brilliantly. Deuce.

A great angled forehand flies into the corner from Williams to take the advantage. And then Sharapova hits a little long to hand Williams the game.

That’s much better from Sharapova. A good rally ends with the Russian smacking back a terrific backhand past Williams. She then makes it 30-0 – but then can only double fault.

This time it’s Williams who overhits and Sharapova has a chance to get an important hold. She takes it and that’s an important one to win to keep a foothold in this match.

Williams drops the first point as she hits a soft backhand into the net. But then Sharapova tries to gently lift a backhand over the net – but it fails to get over it. 15-15.

Sharapova tries for a winner, but again overhits. Williams then fires down a strong serve before holding the game with her next serve.

A great rally starts off the second start but it’s mostly Sharapova doing the running. Williams again comes out on top before a double fault makes it 0-30. Could Williams break so early?

Sharapova hits the net and Williams has three break points. Sharapova saves one – the first point she has won in 10 – but then Williams hammers back a return that Sharapova can’t return. An easy break again for Williams.

Williams 6-1 Sharapova* (*denotes next to serve)

Ooph so close. Williams is getting the rub of the green here. A strong forehand lands on the line before she fires down an ace – Sharapova loses the appeal.

At 30-0, Sharapova goes for a big forehand – but sees it go a little long. And Williams sees a dink hit the top of the net – and land the other side. Another bit of luck – not that she needs it – wraps up an easy hold. The American takes the first set comfortably. How will Sharapova respond?
1:13AM
Williams* 5-1 Sharapova (*denotes next to serve)

Williams is making Sharapova run a fair bit and takes the lead as she forces the Russian into a mistake. A strong ace levels the game. 15-15.

But the Russian angles a forehand just out and is again under pressure on her serve. Williams again powers back a forehand and Sharapova can only hit long. Break point. And a backhand from Sharapova hits the net, ensuring a second break for Williams.
1:09AM
Williams 4-1 Sharapova* (*denotes next to serve)

A great backhand from Sharapova lands just in – but the next forehand is a little wild. 15-15. The Russian can’t quite reach a backhand to get it over the net and then Williams dominates the next exchange, finishing off with a powerful forehand that flies past Sharapova. A strong serve from Williams wraps up the game.
1:05AM
Williams* 3-1 Sharapova (*denotes next to serve)

Sharapova loses out in a rally to kick off the next game but Williams then hits long to make it 15-15. The American again hits long as Sharapova edges in front. But the American thwacks back a strong return and Sharapova fails to return. 30-30.

Ooph. Sharapova mishits hits from the baseline and Williams has a chance to break. And she takes it, as Sharapova can only find the net. First break of the match.
1:00AM
Williams 2-1 Sharapova* (*denotes next to serve)

Sharapova has started well and gets the first point in the next game. But boom – another ace from Williams. The American makes it 30-15 before sending down another strong serve to make it 40-15. But a double fault makes it 40-30 before Sharapova smacks back a perfect return to make it deuce.

Sharapova does well to return again but after a great rally, Williams comes out on top. And a good serve wraps up the game.

Williams levels it to make it 15-15 as she wins a lengthy rally, hitting a forehand that a stretching Sharapova can’t quite bat back. After trading points again, Williams goes a little long with her forehand and Sharapova has a chance to win the game. Another strong serve for the Russian wraps it up.
12:53AM
Williams 1-0 Sharapova* (*denotes next to serve)

That’s a good way to start for Williams, smacking down an ace with her first serve. Sharapova levels it, but then hits long.

At 30-15, Williams fires down another ace before hammering down a forehand to take the game. Good start for the American.
12:50AM
Williams 0-0 Sharapova* (*denotes next to serve)

And here we go.

Serena Williams and Maria Sharapova are set to face off for the first time at Flushing Meadows in a showdown of career Grand Slam holders.

Williams has won their past 18 meetings, dating back to the 2004 WTA Finals, and has won 16 successive sets over the Russian (36-3 overall during the streak).

The 37-year-old is 7-1 against Sharapova on the major stage, holding wins at the other Grand Slam events. Sharapova’s lone success came in the 2004 Wimbledon final. Both come into the clash undefeated in the opening round at the New York major: Williams is 18-0, Sharapova 12-0. Williams is playing her first match since retiring down 3-1 to Bianca Andreescu in the first set of the Toronto final. Currently ranked No. 87, Sharapova’s last match was a 6-4, 6-1 defeat to Ashleigh Barty in the second round of Cincinnati.

Wake up every morning with Tennis Channel Live at the US Open, starting at 8 a.m. ET. For three hours leading up to the start of play, Tennis Channel’s team will break down upcoming matches, review tournament storylines and focus on everything Flushing Meadows.

Tennis Channel’s encore, all-night match coverage will begin every evening at 11 p.m. ET, with the exception of earlier starts on Saturday and Sunday of championship weekend.

Williams 1-0 Sharapova* (*denotes next to serve)

That’s a good way to start for Williams, smacking down an ace with her first serve. Sharapova levels it, but then hits long.

At 30-15, Williams fires down another ace before hammering down a forehand to take the game. Good start for the American.
12:50AM
Williams 0-0 Sharapova* (*denotes next to serve)

That’s the ceremonial formalities out of the way, here come the players.
12:19AM
Time check

The ceremony is under way, so players should be out in a few more minutes time.
12:17AM
Williams and Ramos won’t meet again

One thing is for sure, there will be no court reunion between Williams and umpire Ramos at the US Open this year.

US Open officials said on Friday that Serena Williams had not made a formal request for chair umpire Carlos Ramos to be kept away from her matches over the coming ­fortnight. Yet they have still ­decided to separate the two for the benefit of the tournament, writes Simon Briggs.

Last year’s final turned into what a recent ESPN documentary ­described as “the ugliest finish in grand-slam history” after Ramos ­issued Williams with three code violations, prompting the partisan New York crowd to boo the ­victorious Naomi Osaka when she stepped up to the presentation dais.