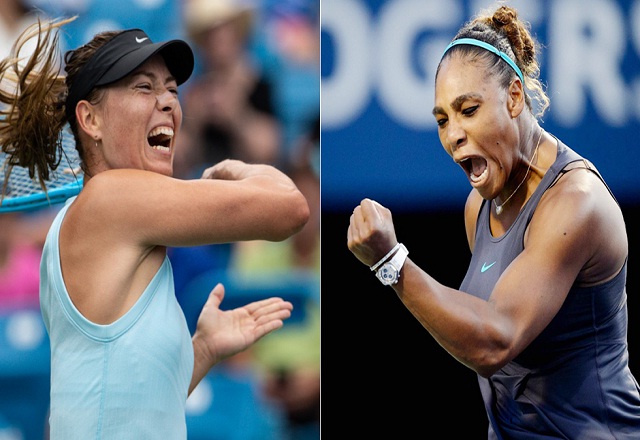 Serena Williams is still chasing a 24th Grand Slam title. Since returning from a year off for the birth of her daughter, Alexis Olympia, the 37-year-old has reached three major finals – 2018 and 2019 at Wimbledon and last year’s U.S. Open.

The latter was memorable for all of the wrong reasons. Williams fell to Naomi Osaka in controversial fashion, as Williams argued mid-match with chair umpire Carlos Ramos, who penalized her for receiving coaching signals from the stands.

Coming off a Wimbledon loss to Simona Halep, Williams opens this year’s tournament against old rival Maria Sharapova on Monday in first-round action at Flushing Meadows. Will Williams nab a record-tying 24th Grand Slam tournament title in tennis’ final major of the year? USA TODAY Sports examines why Serena will win it all:

1. Last year’s setback. Williams’ heartbreak from last year’s controversial ending could serve as fuel. Williams has been candid in interviews that last year’s loss to Osaka deeply affected her based on the way in which it happened (Ramos’ penalty eventually cost her a crucial point, curtailing her momentum in the match. She was also fined $17,000 for verbal abuse, coaching violation and racket abuse.) Williams said afterward that she felt Ramos was acting sexist and would not have treated a male player in the same manner. Ramos won’t oversee any of her matches this year.

2. Experience factor, others not on their A-game. Williams has been on this stage plenty and often finds a way to rise to the occasion; she’s reached nine U.S. Open finals, winning six of them, and she’s reached 32 Grand Slam finals. Meanwhile, Osaka has struggled since winning the Australian Open at the beginning of the year, suffering an early exit in the French Open and getting upset in the first round of Wimbledon. She also has been dealing with a nagging knee injury.

3. Her grit, perseverance at 37. A proud mother, Williams has said publicly how her newfound identity recharged her for the latter stage of her career. Her serve, forehand and mechanics can be on point, but the secret ingredient to her play has arguably been her passion — emotional expression is so often at the forefront of her success — and her ability to beat the odds (beating her older sister Venus as a teenager, fending off injuries in the middle stages of her career, and simply coming back to the sport from a grueling pregnancy). On the biggest Grand Slam slump of her career, she’s in the midst of Father Time skepticism now. Finding a way to channel the majors’ wall she’s at will be key.

Why Serena won’t win it all: 1. Too many blossoming players in the way. In her Wimbledon loss to Halep (6-2, 6-2), she was clearly the lesser player. Even though she’s still reaching Grand Slam finals, Williams sometimes is coming up short against younger players. Osaka remains the No. 1 player in the world despite recent woes, and every player besides Williams in the WTA top 10 are under 30.

2. Her path to semifinals is tough. Serena vs. Sharapova in the first round was the headline the U.S. Open was hoping for. If Williams advances, her side of the bracket isn’t exactly easy. Although contenders Osaka and Halep are on the other side, there’s more depth on Williams’ pathway. Some dangerous potential matchups for Williams if top seeds win out: No. 12 seed Anastasija Sevastova (in the fourth round), world No. 2 Ashleigh Barty (in the quarterfinals), and fifth-ranked Elina Svitolina (in the semifinals). Barty won the French Open and is poised for a breakout performance, while Svitolina has six wins over a world No. 1 to her name, including a straight-sets victory over Williams in the Rio Olympics.

3. Her health might not be 100%. Trailing 19-year-old Bianca Andreescu 3-1 in the Rogers Cup this month, Williams retired due to back spasms 16 minutes into the match. Williams’ tuneup opportunities have been limited (she also skipped the Western and Southern Open in Cincinnati), so there might be some cobwebs at the start of this U.S. Open.