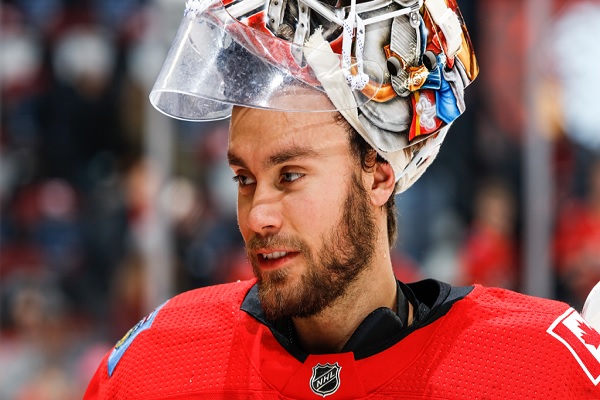 Eddie Lack is potentially getting a head start on his next career while not giving up on playing again in the NHL.

Needing more time to recover from December surgery to repair a torn labrum in his left hip, the 31-year-old goalie has joined Arizona State University’s hockey team as a volunteer goalie coach.

“I’m still very young, so I haven’t thought about it too much. But it’s a fun experience to try coaching,” Lack said Thursday. “There’s a few other things that I want to try to see and we’re going to see where I end up, but this is definitely something that I’m interested in.”

The veteran of 144 NHL games during five seasons with the Vancouver Canucks, Carolina Hurricanes, Calgary Flames and New Jersey Devils plans to continue rehabbing his hip with the hope he’ll eventually be able to play again. In the meantime, he said he believes he can help the Sun Devils goalies with the knowledge he’s acquired playing in the NHL, American Hockey League and his native Sweden.

Lack began working with them during a 10-day training camp prior to Arizona State’s trip to Beijing to compete in the Renaissance Cup earlier this month. The Sun Devils won the round-robin tournament, which included Kunlun Red Star, the Beijing-based team in the Kontinental Hockey League, and three teams from the Supreme Hockey League (VHL), which includes minor affiliates of many KHL teams.

“I think I can share a lot,” said Lack, who was disappointed that he was unable to travel to China with the Sun Devils because of a visa issue. “Obviously, I know a lot about the goaltending position. That’s what I’ve been doing my whole life. So far it’s been coming very natural for me. So far it’s been pretty easy for me just to see what the guys need to work on, what they’re good at and what we need to spend a little bit more time on.”

Lack, who has a home in the Phoenix area, began his interaction with the Sun Devils last summer when he skated and worked out at their facilities to prepare for the 2018-19 season. He returned to Arizona after his surgery and began attending some Sun Devils games, which led to his relationship with coach Greg Powers.

When volunteer goalie coach Andrew Matheson was promoted to operations director after last season, they needed a replacement. Lack expressed interest, and Powers loved the idea.

“He’s going to be a great addition,” Powers said. “He fits right into our culture. He’s an easygoing guy and he’s just a really positive human, and I think he’ll make a big impact on everybody.”

Lack intends to remain with the Sun Devils for the full season while continuing to rehab his hip, but said there’s an understanding that he can leave to resume playing if he feels healthy enough and an opportunity arises.

“If something happens and all of a sudden it starts feeling really, really good here in a few months, they kind of said they would understand,” Lack said. “We’re going to see how it goes.”

Lack said his left hip had been bothering him on and off for six years and reached the point last season when he needed surgery. He began the season as the backup with New Jersey but did not play while Cory Schneider was recovering from a hip procedure, then was sent to Binghamton in the AHL when Schneider returned.

After struggling through six games with Binghamton, going 2-3-1 with a 4.10 goals-against average and a .863 save percentage, his hip forced him to stop playing after a 5-3 loss to Syracuse on Nov. 23. He had a similar issue with his right hip six years ago and said it took him more than a year to feel 100 percent after the surgery.

Nearly eight months after having surgery on his left hip, Lack doesn’t feel nearly ready to play. He said a few teams contacted his agent, Ray Petkau, during the summer to check on his status, but he told Overhardt he wasn’t healthy enough to commit to a contract.

“In my everyday life and everything, it feels really good right now,” Lack said. “I’m really happy that I got to this point, but right now my body just won’t allow me to play professional hockey. Hopefully if I keep rehabbing and keep doing the right stuff, then I’m going to feel better on the ice too. But right now, I’m not there.”

“Rollie is by far the best one that I’ve had just being honest with the guys but also hearing out their expectations and meeting their goals,” Lack said. “It’s so different from guy to guy what you need to work on, so being honest where they are and being a good sounding board for them and talking ideas and talking about my experience and everything is very valuable.”

Powers said he can already see the impact Lack is having with Arizona State’s goalies — Max Prawdzik, a graduate transfer from Boston University, sophomore Evan Debrouwer and freshman Justin Robbins.

“The way he interacts with them and the way they absorb his information, it’s cool to see,” Powers said. “He’s got a great personality and at the end of the day, that’s all coaching is — connecting with your players and finding a way to get the right messages across to where they get better. You can see he’s already got that natural ability.”