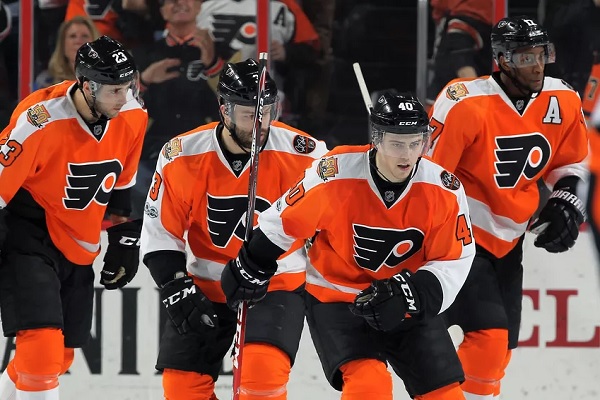 In today’s NHL rumor rundown, there are more details coming forward about the process that saw Sebastian Aho sign an offer sheet. There is also buzz that the Philadelphia Flyers and Travis Konecny are closing in on his extension while the Chicago Blackhawks and Brandon Perlini are close as well. In Toronto, Jake Gardiner is simply waiting for Mitch Marner and one more name has been added to the Minnesota Wild GM interview list. Finally, is there a trade on the table for Zach Parise?
More Background Details on Aho Offer Sheet

We wrote not long ago that Sebastian Aho was glad the way things turned out in Carolina and that he might have jumped the gun a bit on signing the offer sheet with the Montreal Canadiens. There are more details coming out about that process.
Sebastian Aho Carolina Hurricanes

According to Chris Johnston of Sportsnet, Aho says he never had a clue an offer sheet was coming and when he signed it, he hadn’t spoken directly to Montreal Canadiens general manager Marc Bergevin. He didn’t take the time to weigh the pros and cons of moving forward but said, at the time, it felt like the right thing to do.

Part of the reason Aho was caught off guard was that talks with Carolina had been moving kind of slowly and he didn’t expect to receive an offer from another club, especially Montreal, a team he had no idea was interested. The Canadiens were the only team willing to extend him an offer sheet.

Both sides are just glad it’s done now so that Aho isn’t lumped in with all the other restricted free agents still out there just waiting to be signed.

The Flyers and Konecny Close

Flyers radio host Jason Myrtetus reported that a source near the Flyers organization and connected to RFA Travis Konecny, says a deal could be very close.
Travis Konecny Flyers

Close enough, in fact, that he was able to release some details. The expectation is that Konecny will sign a bridge deal, at two or three years with a cap hit around $4.5 million.

Brandon Perlini Deal to be Done Next Week

Of the many RFA unsigned players still out there, Brandon Perlini of the Chicago Blackhawks is expected to come off the board soon. According to Scott Powers of The Athletic, that deal will get done “over the next week or so.” Perlini is the last restricted free agent GM Stan Bowman has to get done.

Add One More to the Wild GM Interview List

Elliotte Friedman notes that Bill Guerin remains the front-runner for the new GM job opening in Minnesota but Chris MacFarland, assistant general manager in Colorado, became the latest to be interviewed on Monday.
Gardiner Waiting on Marner

The latest news on Jake Gardiner comes from Lance Hornby of the Toronto Sun who notes the former Maple Leafs defenseman is waiting on the Marner negotiations.

Despite news Gardiner has a handshake deal with another team, Hornby writes:

Waiting to see what unfolds is UFA defenceman Gardiner, yet to sign elsewhere in the hopes the Leafs find more extra cash, but at this stage that would mean trading a set roster piece.
source – ‘Muzzin buzzin’ for full season with Maple Leafs’ – Lance Hornby – Toronto Sun – 08/19/2019

If true, Gardiner could be waiting until the end of the preseason since the Maple Leafs and Marner may not take any steps closer to one another until the cap relief for Nathan Horton and David Clarkson kick in.

From most accounts, Marner and the Maple Leafs aren’t close on a deal.

Trade Offer for Parise on the Table

Michael Russo of The Athletic reports there is a team interested in Zach Parise and a trade was offered for the veteran forward. The franchise interested was unnamed but speculation is that there was another big, hard-to-move contract coming back.
Zach Parise Wild
Minnesota Wild forward Zach Parise (Marilyn Indahl-USA TODAY Sports)

He has a full no-move, not a 10-team no-trade. … but I can tell you the one trade offer the Wild had for Parise this summer was another team’s bad veteran contract. He’ll be 36 next summer and carries a $7.538 million cap hit, so it’s not an easy trade to make.
source – ‘Ask Russo: On Wild’s GM search, Winter Classic, future of key players and more’ – Michael Russo – The Athletic – 08/18/2019