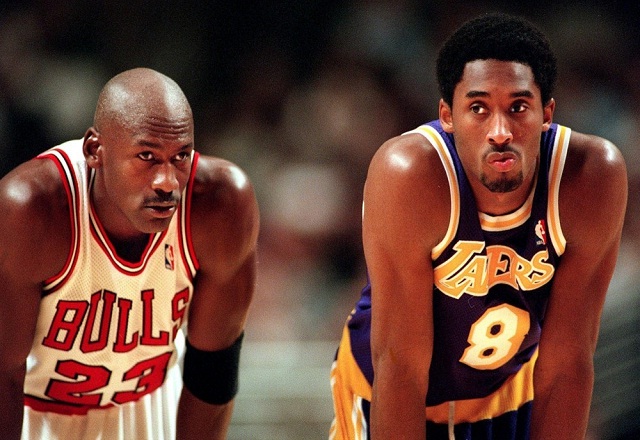 Kobe Bryant always looked up to Michael Jordan. It doesn’t take long into any Kobe Bryant highlight reel to see the obvious influence ‘His Airness’ had on Bryant’s game. So it must’ve been absolutely crushing when his idol told him he could “never fill” his shoes.

On Episode 52 of the ‘No Chill Podcast’, former NBA guard Gilbert Arenas told a story from the 2002-03 season, in which Jordan was in the second season of his NBA comeback with the Washington Wizards.

Earlier in the season, Arenas stated that after a game MJ told a young Bryant—metaphorically speaking of course—that he could wear his shoes, but “never fill them”.

Gilbert Arenas says MJ told Kobe after a Wizards/Lakers game that he could wear the shoes but "never fill them."⁣ ⁣ Kobe got so mad that he didn’t speak to teammates for two weeks.⁣ ⁣ When LA played the Wizards again, Mamba dropped 55.⁣ ⁣ (via ‘The No Chill Podcast,’ @balldontstop, @no.chill.gil)

Arenas went on to say that the “Black Mamba” went on to drop 55 points on Jordan the next time the Wizards and Lakers faced off, and the folks over at Basketball-Reference can back this up.

Bryant was locked in all season but had 30+ point games in three of the five contests leading up to his game No. 72 matchup with MJ in ’03.

While MJ’s harsh words certainly rubbed Bryant the wrong way—who didn’t talk to his teammates for weeks after the incident—but you could say Jordan’s words served as long-term motivation, as Kobe went on to win two more NBA Championships after the ’03 season.

Despite Bryant’s five NBA titles, one could argue he never did quite “fill” MJ’s shoes, a large task for anyone, even a surefire first-ballot Hall of Famer like Kobe Bryan