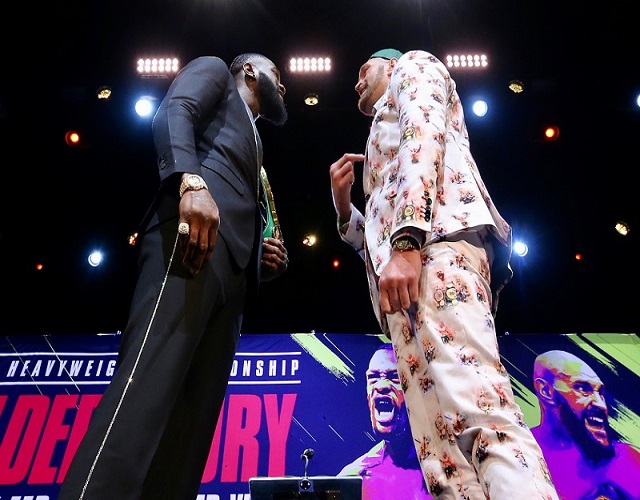 Deontay Wilder has questioned Tyson Fury’s decision to hire Sugarhill Steward as his new trainer ahead of their pulsating rematch at the MGM Grand on February 22. In the opening press conference to promote the bout, in LA, Fury was quick to remind the ‘Bronze Bomber’ of how he got ‘robbed’ from collecting the WBC title in 2018. Accusations came after the judges scored the initial meeting a split draw. Now in the midst of his training camp, Fury made a decision to return to the Kronk Gym with Steward alongside Andy Lee as part of a newly-formed team. The move has seen him split from Ben Davison. The man who deserves a huge amount of credit for getting the ‘Gypsy King’ back in the ring and back on track in life. With it being Fury’s third trainer and second in as many years, Wilder believes it has shown a chink in Fury’s armor. “If he beat me, then why all the new trainers? Every day it changes. Firing and hiring,” pointed out Wilder. “He wants to talk about being out of shape the first time, but he was in great shape. He spent 100,000 pounds on all those camps. “I still to this day have the same people with me and I don’t need to change it.”

THREAT
Despite the shake-up from Fury, Wilder is predicting an explosive outcome. The American has made a sickening threat ahead of the return. “When you’re facing power there’s no way around it. You can’t prepare for that. You just have to hope that when it lands, it doesn’t do that much damage. “He doesn’t even know how he got on the ground or how he got up in the first fight. He’s been dealing with feeling ever since the end of the first fight. “I’m going to do exactly what I said I would do. So I’m going to knock him out. I’m the lion and I’m the king of the jungle. I’m going to rip his head off his body. “Everyone sit tight and buckle up. It’s going to be a fun ride on the way to giving everyone the best fight you’ve seen in your lives.” It’s not the first time Wilder has made such an eye-watering prediction for a fight. He previously stated he ‘wanted a body on his record’. Wilder also predicted he’d kill someone if he ever competed in MMA.