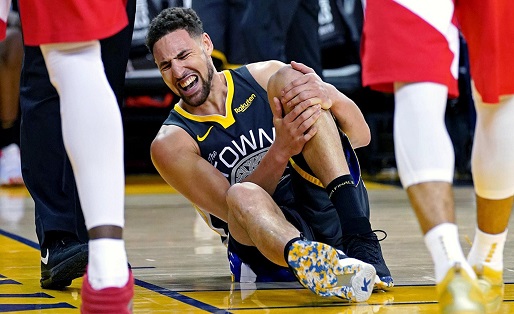 According to ESPN, Golden State Warriors All-Star Klay Thompson has undergone successful surgery to repair his torn ACL. Reports says that Dr. Neal ElAttrache performed the procedure at the Kerlan Jobe Institute in Los Angeles. Thompson is expected to miss 9-10 months recovering from the injury.

Thompson suffered the torn ACL after a hard foul late in the third quarter during a Game 6 Finals contest against the Raptors. Thompson came down brutally on his left leg, and his knee buckled as his foot made contact with the hardwood. The team announced that Thompson underwent an MRI following his exit, which confirmed that he suffered a torn left ACL. Thompson was the game’s leading scorer with 30 points before the injury.​

Thompson signed a five-year, $190 million contract to stay with the Warriors when free agency began on Sunday. Thompson averaged 21.5 points per game in 2018-19 while shooting 46.7% from the field and 40.2% from three.

Wojnarowski previously reported that Thompson’s rehab could go late into next season, extending as far as possibly February or March.

Golden State finished the regular season with the Western Conference’s best record at 57–25, but lost to the Raptors in the NBA Finals.