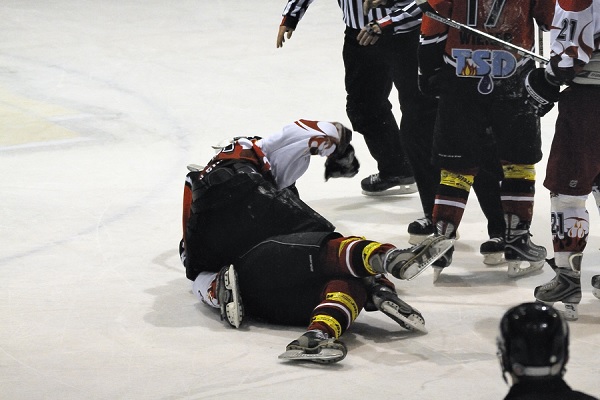 A trial in the wrongful death lawsuit against the National Hockey League filed by Kelli Ewen, the widow of former NHL enforcer Todd Ewen, will take about three weeks and is expected to feature more than 20 witnesses, according to newly filed court documents.

As part of the lawsuit, filed in California district court on April 30, lawyers for Ewen and the league were required to advise the court about the particulars of the case, including how long a trial might take, the main arguments to be made, and prospective witnesses.

On Thursday, the sides filed a 17-page brief called a joint case management statement that outlined the issues for a potential trial.

According to the statement, key witnesses in the case will include Boston University neuropathologist Dr. Ann McKee, who has discovered the brain-withering disease chronic traumatic encephalopathy, or CTE, in former NHL players including Todd; NHL personnel, including commissioner Gary Bettman; and NHL team personnel who witnessed relevant information regarding Todd’s head injuries during his time in the NHL.

The league wrote that other witnesses may include NHL club doctors and trainers, NHL Players’ Association personnel, Todd’s family members, and his post-hockey career business colleagues.

Ewen is seeking “compensatory damages and all other damages permitted by law.” It’s not clear when the trial might start, but it won’t be before September of 2020 when discovery is scheduled to wrap up.

Todd, who fought his way through a dozen NHL seasons, battled depression, anxiety and memory loss for the last 20 years of his life. Ewen says her husband was certain he had CTE.

“[Kelli Ewen] alleges the NHL fostered an environment that encouraged and pressured players like Todd to fight opponents for entertainment and to increase revenue, also increasing the risk that players developed long-term brain damage, all while downplaying the risk of repeated head trauma,” her lawyer, Brian Gudmundson, wrote in Thursday’s court filing. “To this day, the NHL carries the dubious distinction of being the last ‘league of denial’ and denies that repeated head trauma poses any risk of permanent brain damage.”

A lawyer for the NHL wrote that Ewen’s lawsuit should be dismissed because the league’s collective labour agreement with the NHLPA addresses issues such as player health and safety. Ewen’s claim should have been a matter for a private grievance, not a trial, the NHL says.

Todd’s case has played a key role in the debate over CTE and concussions in hockey.

“…although I respect Ann’s findings and [am] not contesting any of it, I am just surprised to see that Todd had so very little [of the] disease for an enforcer,” Dr. Hazrati wrote in a Nov. 26, 2018 email to TSN.

Bettman used Todd’s case in his defence of the NHL to U.S. lawmakers.

In a July 26, 2016, letter to U.S. Senator Richard Blumenthal, who had asked for information from the NHL about the impact of concussions in hockey, Bettman blamed the media for stoking fear of the long-term effects of head injuries and ended his letter by retelling Todd’s story.

Other NHL players who have been diagnosed with CTE include Bob Probert, Derek Boogaard, Jeff Parker, Wade Belak, Larry Zeidel, Reggie Fleming, Rick Martin, Steve Montador and Zarley Zalapski. Four unidentified former junior hockey players who all died of suicide before the age of 30 also tested positive for the disease.