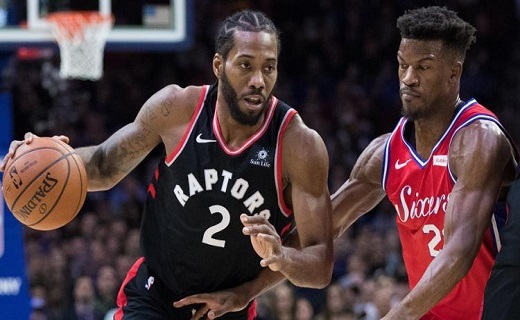 The Lakers Believes they have strong chance to bring Kawhi Leonard into their team.

American Music Superstar Drake said “is said to be mounting his own recruiting campaign on top of whatever the freshly minted champions are doing to convince him to stay. however, its hard to say what impact Drake might have on the low-key superstar, but it’s worth noting.

According to the Times, The Lakers believe they’re “firmly in the lead” to land the star because of the “recruiting efforts and assurances made on separate fronts” by some high-profile pitchmen, too: former president of basketball operations Magic Johnson and LeBron James,

Leonard was named the Finals MVP and helped the Raptors avoid elimination by knocking down a crazy bouncing buzzer beater in the fourth quarter of Game 7 against the 76ers in the second round. He was sent from the Spurs to Toronto in a blockbuster trade last summer and he almost single-handedly carried the team to its first title in franchise history.Leonard averaged 30.5 points in the playoffs

Leonard is reportedly reconsidering returning to Toronto, while the Clippers are in the mix to sign him, as well.

The Lakers, meanwhile, acquired Anthony Davis from the Pelicans last month in exchange for Brandon Ingram, Lonzo Ball, Josh Hart and three first round picks. They then cleared cap space to sign a third star to pair with Davis and James when they dealt three bench players to the Wizards last week.

Davis also reportedly waived his $4 million trade kicker so the Lakers could have more flexibility.

“My goal is to win a championship,” Davis told the Los Angeles Times earlier this week. “I expect to win every time I step on the court, every game. I want to win a title. That’s what it’s about – winning titles. That’s the only thing on my mind.”

Los Angeles also agreed to a one-year deal with Troy Daniels, according to multiple reports. He has connected on 40% of his 3-point attempts over 292 NBA games.

Related Topics:ClippersKawhi Leonard
Up Next