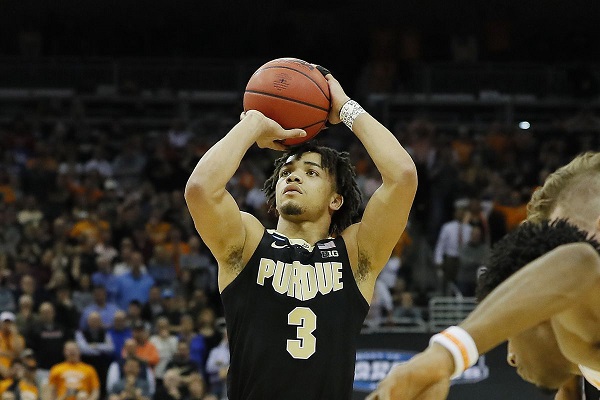 Boston has seen all it needed to from Carsen Edwards.

The Celtics are signing the rookie to a four-year, $4.5 million deal, according to a report from the Boston Globe, which cites an unidentified league source.

Edwards, 21, was selected by Boston with the No. 33 pick in the 2019 NBA Draft. The former Purdue standout has a reputation for being a prolific scorer, and he showcased his craft well throughout this year’s summer league in Las Vegas, Nevada.

The 6-1 guard tallied 23 minutes per contest and averaged 18.0 points while shooting 52% from the field in four appearances with the Celtics.

According to a league source the Celtics and 2nd round pick Carsen Edwards have come to terms on a guaranteed contract.

Romeo Langford, Grant Williams and Tremont Waters were all drafted by Boston in June and are hoping to become rotation players, like Edwards. The departures of Kyrie Irving, Terry Rozier and Al Horford could give each young player ample opportunity to contribute in 2019-20.

The Celtics entered 2018-19 as the favorites to come out on top of the Eastern Conference but finished the year fourth in the standings. They were eliminated by the Bucks in the the second round of the playoffs in five games.

Boston has an All-NBA talent in Kemba Walker, but it could have to develop its young core quickly to keep up in a rapidly improving field.

Related Topics:Carsen Edwards
Up Next

NBA TRADE NEWS: Chris Paul may not stay with the Thunder for long AsThunder Hope To Move Him quickly