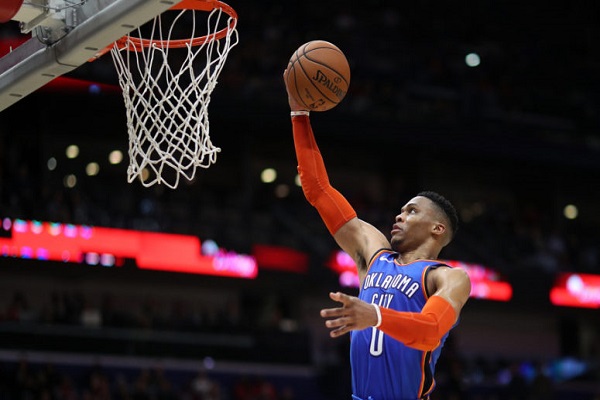 Once Paul George requested that Thunder general manager Sam Presti trade him to his hometown Clippers, Russell Westbrook’s days in Oklahoma City were numbered. The team as constructed was going nowhere. The Thunder were stuck in the middle of the pack with another first-round exit on the horizon.

But Westbrook for Chris Paul straight up? No one saw this one coming.

The Westbrook-to-Miami rumors at least made some sense. The Heat have been stagnant for years, and Pat Riley doesn’t rebuild. But why Houston?

The cracks in the Rockets’ walls were getting close to destroying the foundation. Paul and James Harden could no longer coexist. The stubborn, ball-dominant guards had reached the end of their partnership. As one league source told Yahoo Sports’ Vincent Goodwill, Harden “wanted Chris up out of there.”

Rockets general manager Daryl Morey choosing to trade Paul makes sense, but exchanging him for Westbrook is, at the very least, a risky gamble.

Just a few short months ago, Westbrook got crushed for his unimpressive play. His first-round exit, capped off by a deep 3-pointer from Trail Blazers star Damian Lillard, brought on all of the hot takes.

His best days are behind him. He will never change his playing style. No matter what happens, he can never be the No. 1 option on a championship team.

Now Westbrook will suddenly flip a switch and transform into a new player? Good luck with that.

Harden is the most ball-dominant guard of our time. The main reason for the animosity between him and Paul was because of playing style. Paul wanted a more free-flowing offense. Harden, with Mike D’Antoni backing him, was more comfortable running an isolation offense.

That’s what makes this acquisition so puzzling. Sure, the Rockets get a younger, more athletic guard in Westbrook. They get a player that still has a lot left in the tank, someone that has played well alongside Harden in the past. But this isn’t 2012. They aren’t sharing the ball with Kevin Durant. They are responsible for the two highest usage percentages over a full season in league history.

The gamble for Morey and the Rockets was almost necessary. The Harden and Paul pairing had run its course – but this isn’t the move. It won’t work out.

The onus will fall on Westbrook. He’s joining Harden’s Rockets, not the other way around. On a Houston team that attempted more 3-pointers per game than any other team in the league last season (45.3), Westbrook just doesn’t fit. Westbrook has the lowest career 3-point percentage of any player in history with at least 2,500 attempts. Westbrook is willing to launch from deep, and that shouldn’t change under D’Antoni. It’s also a huge problem.

Westbrook has officially reached a crossroads in his career. Is he willing to give up control to Harden? Or will we continue to see the hard-headed approach that has been so painful to watch over the past three seasons?

Odds are, Westbrook will be the same guy. For Morey, moving on from Paul was a necessity, but this couldn’t have been his first choice.

The Western Conference just got more exciting. The 2019-20 NBA season should be one of the most entertaining that we have seen in some time

But don’t expect the Rockets to truly be in the mix. A move has been made, but it’s not for the best.

Related Topics:Russell Westbrook
Up Next