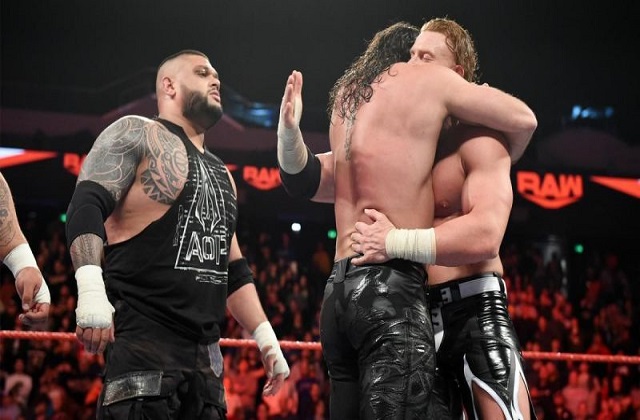 When a fistfight was announced between Seth Rollins and The AoP against Kevin Owens and Samoa Joe, a lot of us were interested to see how it would eventually play out. And it was a lot more interesting than advertised, with Kevin Owens performing an incredible move, during the course of the main event segment.

But even that was overshadowed by the fact that Buddy Murphy, who was sitting at ringside during the whole ordeal, came in and joined forces with Rollins. He would embrace the leader of the faction and celebrate with his buddies at the end of the show, leaving the world absolutely stunned.

So, why was the decision made to book Buddy Murphy like this? I will try and answer the question with 5 points and I invite you to leave a comment and let me know your thoughts and your views.

Do you think that this new Buddy Murphy has the potential to be a top star?

Why do you think Aleister Black won three matches in a row against a superstar like Buddy Murphy? It is because, as explosive as Murphy is in the ring, he did not have a character on RAW except for the fact that he’s a very good wrestler. WWE is built on characters and to be fair, Murphy was just another guy until the recent events.

But now, one can go so far as to say that he’s actually ascended a rung above Aleister Black, having joined the hottest heel faction on RAW at this moment. The AoP too returned from obscurity to become the most dominant tag team on RAW, even more so than the current Champions.

Murphy was always a promising star, but now he has been positioned to become the next big thing.
#4 To tease the potential of more members joining

This is my new favorite thing. https://t.co/yiStghJVL5

Growing up, I was a huge WCW fan and one of the things most impressive to me was just how many members there were in the nWo. I know that everyone looks back with the benefit of hindsight and claims that there were far too many members, but back then, at least to me, the beauty of the group was not knowing who would join next.

As the Monday Night Messiah, which seems to be a new gimmick for Seth Rollins, I can absolutely see him recruiting more and more heels from the roster to bolster his squadron of evil and conniving individuals. Maybe Bobby Lashley joins the stable once his feud with Rusev is done and he becomes the fighting machine that we’ve all wanted ever since we first heard that he’d be heading to WWE.

Maybe Andrade is the next man to be recruited into the fold and he finally lets Zelina Vega go, based on the fact that we’ve seen a few cracks in the dream team in recent weeks.
#3 To elevate more babyfaces as well

Could 2020 be the YEAR of @KingRicochet?

Following a big win on #RAW, the One and Only looks to win the Men's #RoyalRumble Match! pic.twitter.com/TFsPzpRr4Q

As long as you have antagonists, you need an equal number of protagonists as well, to balance things out. So, we already know that The Big Show, Samoa Joe, and Kevin Owens are on the side of the good guys, but who could potentially join the ranks and even things out?

The first name that comes to mind is Aleister Black because of his history with Buddy Murphy. And yet, I don’t think that he fits the character of a man who plays well with others, so we may need to consider a few more names with regard to the babyfaces.

Yet another name that immediately springs to mind is one Ricochet, a person who even picked up a very big win on RAW and someone who has tonnes of potential to break out and become a superstar in his own right. Maybe someone like Rey Mysterio will be involved in this rivalry when he’s done with Andrade.

The possibilities are truly endless and they are also quite exciting.
#2 To eventually book his breakout feud against Rollins

No faction in history has lasted until the end of time, even though many have tried. The Shield was first betrayed by Seth Rollins and then by Dean Ambrose, both of whom went on to become heels in the roster. Even The Wyatt Family has been broken up numerous times, most notably by Randy Orton.

So, even this faction is doomed to fail at some point, and one assumes that either Seth Rollins or Buddy Murphy will become a babyface when it does happen. But when it does, there will be a program between these two talented individuals who are two of the best professional wrestlers in the entire world, right now. And like we saw with Roman Reigns, it will allow Buddy Murphy a chance to showcase to the world that he’s not a sidekick but a main-event attraction.

Even though he came up short against Roman Reigns, he could actually score a pinfall victory over Seth Rollins and become a much bigger star if the feud actually happens.
#1 To play the numbers game in the upcoming Royal Rumble match

Last night the Devil came to me in a dream. Told me the truth! I know where I have to go! I know what I have to do! I CAN beat him… I WILL beat him! #WWERAW pic.twitter.com/3wdyU5Hv4H

The best thing about the Royal Rumble is the anticipation, of not knowing who it will be that steps out from behind the curtains. As the clock counts down to zero, the audience has no way of knowing whether the next person that comes out will be a babyface or indeed a heel.

And in this manner, a lot of mini-stories can be told in the actual Royal Rumble match. I mean we say that it’s a match where every man fights for himself, but at the end of the day, you seize the numbers game and do what is in your best interests to keep yourself around until the end.

This is why I think that Seth Rollins will use Buddy Murphy and The AoP to clear out the competition and give him a fighting chance during the match. Bear in mind that he’s a heel now, so he cannot appear all that strong.