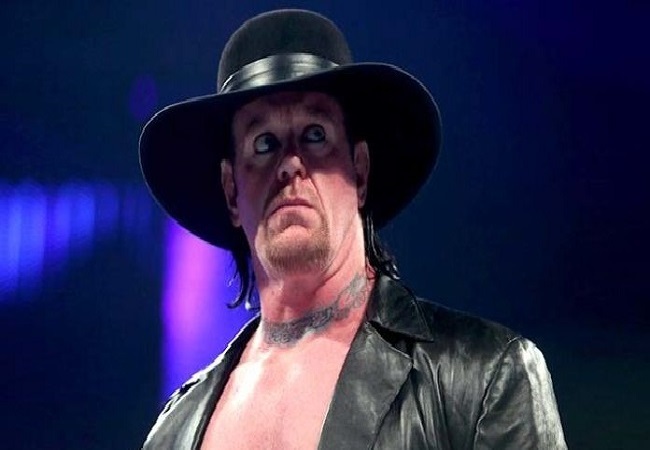 WWE is hinting at a dream match between The Undertaker and Sting, which seems impossible but is actually far from it.

Last week, the company posted the following on its Twitter page, a not-so-subtle tease that “The Deadman” might soon do battle with “The Icon” for the first time ever:

As unlikely as that match may seem, it’s—believe it or not—a realistic possibility.

Sting hasn’t wrestled since suffering what most have deemed a career-ending neck injury during a WWE Championship match against Seth Rollins at Night of Champions in 2015. However, the former WCW star and 2016 WWE Hall of Famer revealed back in May at the Starrcast pro wrestling convention that he would wrestle again if it was “for the right price.” Just a couple of months prior, Sting also told Wrestling Travel (h/t Wrestle Talk) that the only bout he would come out of retirement for is that dream match with The Undertaker:

”I mean, everyone knows who it would be. Taker, he’s the only guy I’d come out of retirement for now. No one else. We could just never get it together to make it happen. When I started talking to WWE he was booked with Brock and then I did the deal with Triple H and he had another feud going on at the time, so it was just one of those things we couldn’t make happen.”
Sting

Several years, ago Sting revealed that he was indeed very close to signing with WWE for a match with The Undertaker at WrestleMania 27, telling Slam! Wrestling:

“The best way for me to say it was a scale of 1-10. I think the first three times or so over the years that I spoke with Vince McMahon and was close to going up there, there were a couple of times we got up to maybe a six or a seven. And I think this last go-around we were probably at a nine. We were very, very close. I was actually surprised things turned out the way they did.”
Sting

The cards just never fell the right way for WWE to do The Undertaker vs. Sting, long considered to be one of the biggest possible dream matches in pro wrestling history and one that had its best chance of happening in 2015, when both were under contract with WWE. But now, WWE has a few possible factors that could lead to the match happening, even it would be taking place a good decade too late.

Mainly, The Undertaker seems to have recommitted to working more dates for WWE in the near future, even though, like Sting, virtually all reports indicated that he was retired for good just a few months ago. According to new reports, The Undertaker, who will team up with Roman Reigns at Extreme Rules, is scheduled to work more matches than usual this year, possible working multiple matches before WrestleMania 36 next year. He’s even been linked to a potentially controversial match at SummerSlam against Baron Corbin and has reportedly given WWE a list of possible opponents for future matches, one that includes Drew McIntyre and indicates that “The Phenom” is serious about sticking around to wrestle perhaps a handful of matches before hanging up his boots for good.

Though Taker’s in-ring return at Extreme Rules has long been planned, there is rampant speculation that, following his awful botch-filled match against Goldberg at Super Showdown, he is looking to wash away the stench of that bout and some of his other recent matches that have been, quite frankly, pretty bad. The Undertaker’s last few matches, including his bout against Triple H at Super ShowDown 2018 and his blockbuster tag team match at Crown Jewel last fall, were all lackluster showings and didn’t exactly increase the excitement level for his future bouts. That being said, crowd reaction to Undertaker is still strong, and even though his days as an elite level in-ring performer are gone, a match with Sting isn’t as unfathomable as it may seem.

Sting has openly said that two things would get him out of retirement: A match with The Undertaker and a big payday. Now, WWE can give him both of those things.

Consider that Brock Lesnar received a “seven figure” payday for working Crown Jewel last fall or that Taker was given a massive offer that he “couldn’t refuse” to work Super Showdown last month, and it’s clear that WWE has at its disposal more than enough funds to make a match between Sting and Taker happen, especially with WWE’s continued relationship with Saudi Arabia. The shows held there are massive moneymakers for WWE, which is what has allowed the company to bring back names like Lesnar, Goldberg, Undertaker, Chris Jericho and others in the first place. What’s more, Saudi Arabian officials have a well known preference for WWE utilizing big names from the past on its special events there, even if almost all of the matches featuring part-time stars have been colossal letdowns.

While there is little reason to believe that a match between a 60-year-old Sting (who may not even get cleared to wrestle to begin with, although the same was once said about Kurt Angle and Daniel Bryan) and a 54-year-old Undertaker would be any better than Goldberg vs. Taker was, there is also little reason to think it can’t happen.

Maybe not at WrestleMania. But at another overseas event? Sure, why not.

Related Topics:The UndertakerWWEWWE SmackDown
Up Next

WWE RUMORS: WWE Could Be Setting Up A Major Heel Turn And The End Of The New Day — See Huge Details…