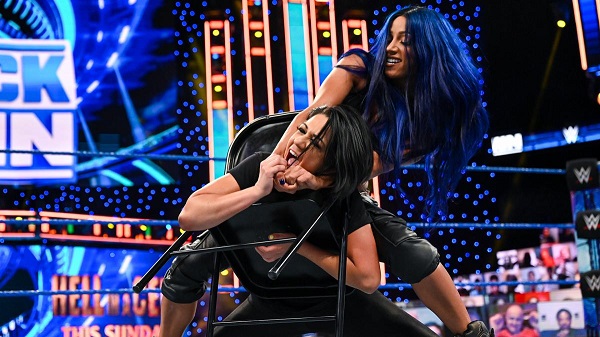 Bayley failed to retain her WWE SmackDown Women’s Title against Sasha Banks. The Boss took the belt from her former best friend the way she claimed she would. There was a point when Bayley was preparing to use the kendo stick on Banks. In this instance, she wanted to beat up Banks using two sticks that she had taped together.

It did not work out the way she intended it to. For a moment, it seemed she got the hang of it, but eventually failed. The stick got stuck between the cage and the support beneath the ring.

Bayley showed utmost frustration at this mishap and even asked for help at one point. When all else failed, she picked out another stick from underneath the ring.

Both of them tried everything in their power to take the win. This match showed the WWE Universe what happens when best friends turn into staunch rivals.

Sasha Banks finally subdued Bayley by wrapping a steel chair around her neck. The Boss pushed her former best friend to the brink of submission by using the Banks Statement.

WWE might put Sasha Banks in a storyline with Asuka. She is the WWE Raw Women’s Champion and was the one to strip Banks of the same title. If this happens, then it will boil down to the battle of brands at the upcoming Survivor Series.

Both Superstars have been rivals since the beginning. It will be intriguing to watch WWE build a storyline involving them all over again. This time, they are both champions. A clash between them will mean that whoever wins becomes the ultimate Women’s Champion.

Considering Banks is known for her ways of making history at WWE, there is a possibility that she will take the throne in the Women’s Division very soon.