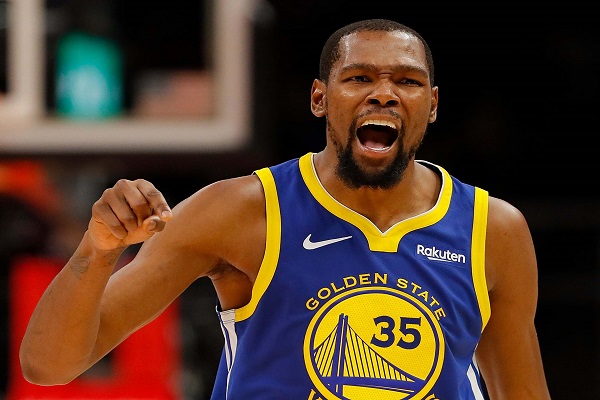 Kevin Durant rubbishes reports claiming that the Warriors rushed him back
It has been two months since Kevin Durant tore his Achilles in Game 5 of the 2019 Finals. Numerous reports and tweets had the Warriors being blamed for this unfortunate injury, and this is the first time that the 10x All-Star has spoken out about what happened on June 11.

“Hell, no. How can you blame [the Warriors]? Hell, no,” Durant told Yahoo Sports. “I heard the Warriors pressured me into getting back. Nobody never said a word to me during rehab as I was coming back. It was only me and [director of sports medicine and performance] Rick [Celebrini] working out every day.”

This was Durant’s immediate response to Yahoo Sports when asked whether he thought the Warriors mishandled his injury.

The 30-year-old and the Warriors were the clear favorites to win the title last season. However, things took a turn when their players started going down with injuries.

With Curry recovering from a foot sprain and playing with a dislocated finger, Cousins playing with a quad injury that had clearly not fully healed yet, Iguodala returning early from a hamstring injury, and Looney playing with a fractured collared bone, reports started to surface that the Warriors were pressuring KD to help the depleted squad.

When he finally returned in Game 5 of the Finals, just a month after he strained his calf, people were concerned that the forward was forced to rush back as the Dubs were down 3-1. Even Perkins, who claims to regularly talk to his ‘brother’, came out and said that the Warriors players and staff pressured the two-time Finals MVP into getting back much earlier than deemed fit.

Rumors further escalated that because of what happened in the Finals, KD was “pissed off” at the Warriors heading into free agency, ultimately choosing to take his talents to Brooklyn.

However, Durant further clarified in his interview:

“…Right when the series started, I targeted Game 5. Hell, nah. It just happened. It’s basketball. Sh*t happens. Nobody was responsible for it. It was just the game. We just need to move on from that sh*t because I’m going to be back playing.”

There you have it. As previous statements by the Warriors have issued, the decision was a collaborative effort and that both the Warriors’ medical staff and KD’s doctors cleared him to play.