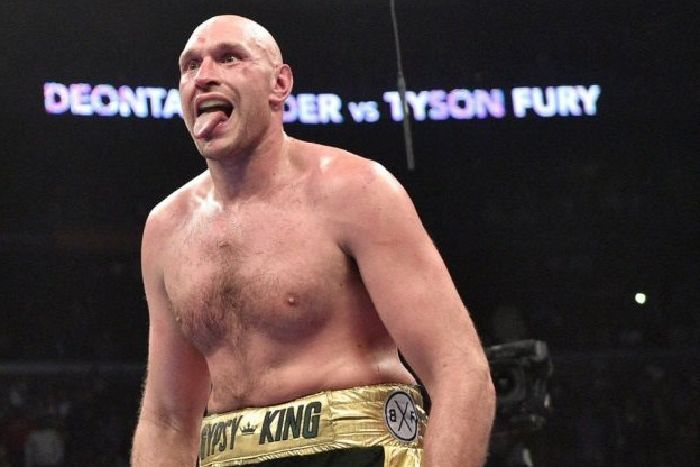 Tyson Fury has shown off his new £300k Ferrari after confirmed his huge rematch with Deontay Wilder is signed and sealed.

Fury pulled up in his flash new motor wearing one of his typically colourful and unique suits as he attended an event with fans in Teesside.

Supporters paid up to £100 a ticket to meet the charismatic heavyweight star and listen to his stories, with the sell-out event attended by around 850 people.

The Gypsy King is known to love his cars, previously arriving at a press conference ahead of his fight with Wladimir Klitschko in a Lambourghini whilst dressed as Batman.

He has now treated himself to a new black Ferrari GTC supercar – the latest addition to his collection of motors. It comes after footage emerged of him confirming on stage at a similar event that his long-awaited second battle with Wilder will take place on February 22 next year.

The bout is expected to be the final part of Fury’s three-fight mega-deal with ESPN, believed to be worth around £80m. He destroyed Tom Schwarz inside two rounds with a masterclass on his Las Vegas debut to kick-off life on the major network in the US.

All roads now lead to WBC champion Wilder, who demolished Dominic Breazeale in the first round of his last fight, provided both get through their next bouts. The pair drew last December in a controversial encounter – and Fury outlined exactly why things will be different when they meet again.

In footage shared on YouTube, Fury says: “The Wilder rematch has been confirmed and signed. 22nd of February, it’s on. Wilder will lace up his gloves again for a second battle with Luis Ortiz in September, whilst Fury’s next fight is expected to take place in October to set up the Wilder rematch.