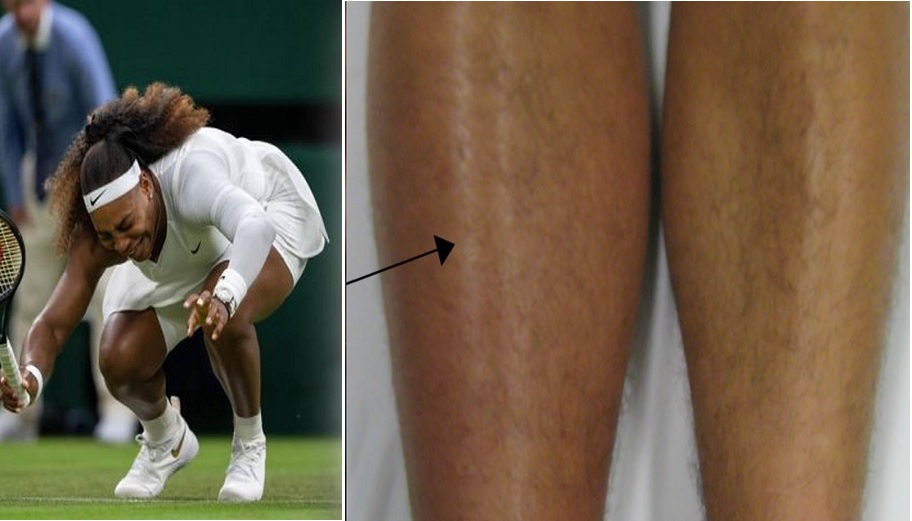 Former World number one Serena Williams has made the headline for a bizarre reason this time: Serena Williams threatened to sue Wimbledon after falling on wet Centre Court grass.

Serena Williams threatened to sue Wimbledon if the Centre Court roof was not closed as drizzle fell during her match against Svetlana Kuznetsova. 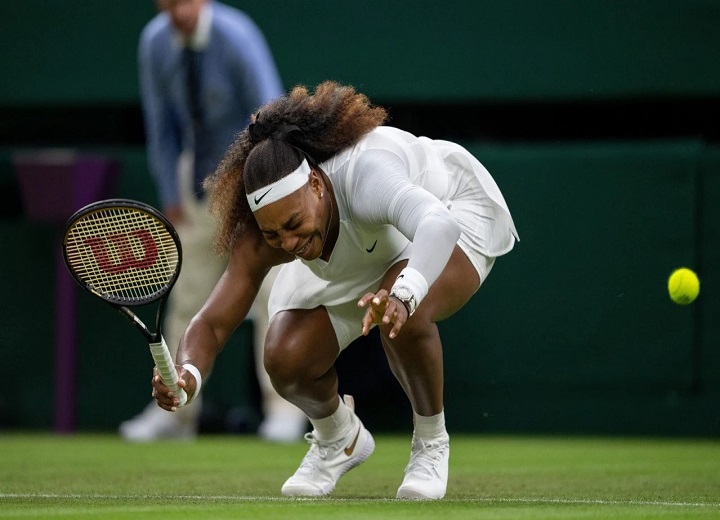 The reigning ladies champion was unhappy to play on at 5-5 in a tight first set of the fourth-round match with the grass becoming slippery. Umpire Marija Cicak came down from her chair to discuss the situation with both players, first Williams and then her Russian opponent.

Williams was heard to say: ‘I’m going to fall. I don’t get it. Can’t they just close the roof?’ Cicak’s response was inaudible, before Williams then said: ‘If I get hurt, I’m suing.’ All across Wimbledon, they were playing on. Not a single umbrella was reached for. But on Centre Court Williams was virtually on strike.

Her radar was alert to the faintest specks of rain and to the greater chance of her own redemption in a fourth-round match against that was turning into an ordeal. 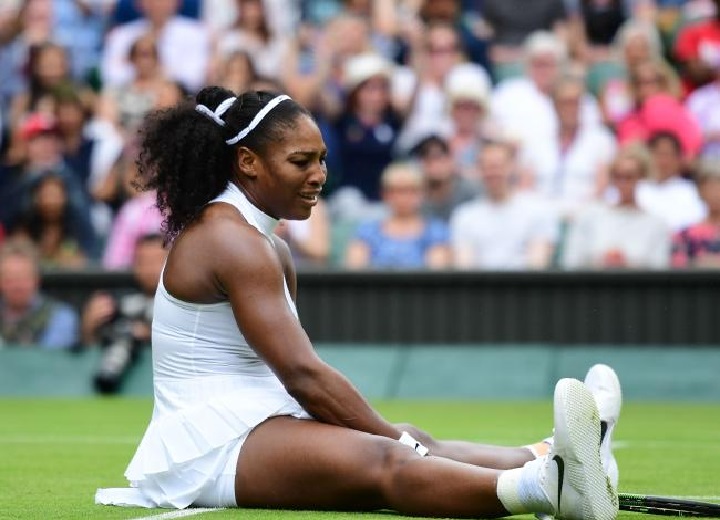 A break was just what the garlanded American needed to readjust herself and break the Russian’s challenge, with the score locked at 5-5 in a long, hard first set. So desperate was Williams that she threatened ‘to sue’ Wimbledon ‘if I get hurt’ had they failed to bow to her request.

It is quite true that the grass was slippery, but the passion with which she made her case to Cicak and tournament referee, Andrew Jarrett, showed that she understood how walking off might change momentum. It did. She won 7-5, 6-0. The first set lasted 56 minutes, the second was 20 minutes of pure butchery.

Once play resumed Williams, searching for the 22nd Grand Slam title that would put her level with Steffi Graf’s record, did not lose another game. 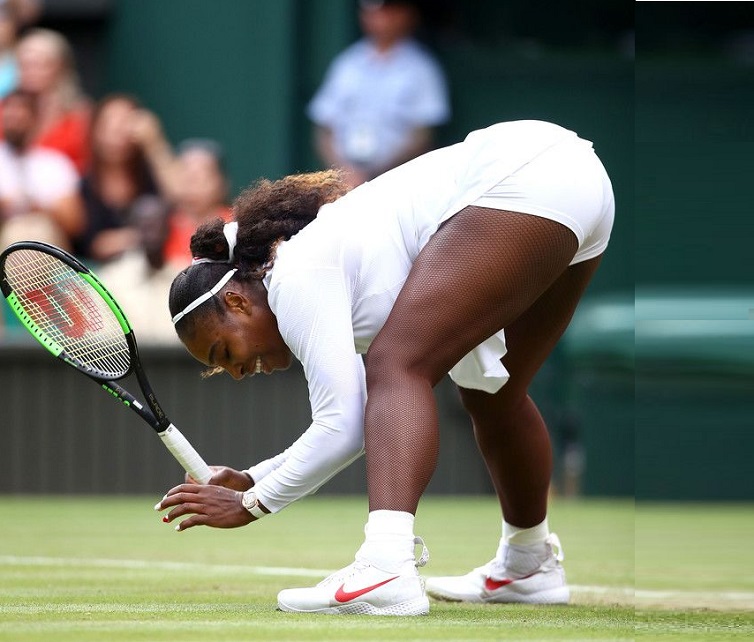 The rain was extremely faint but, in fairness, Williams had already fallen — spread-eagled as a Kuznetsova winner flew past her — and a ball boy slipped as he rounded the back of the court. While Williams was making her view plain, her elder sister Venus, 36, was continuing her match on the adjacent No 1 Court, beating Spain’s Carla Suarez Navarro 7-6, 6-4.

However, play was later briefly suspended across Wimbledon as the rain became more intense. Williams said: ‘It was really tricky out there because even though it wasn’t raining hard, it was dewy. You can fall really easy.’

Double Grand Slam-winner Kuznetsova, who blamed her serve letting her down for being unable to beat Williams for a fourth time, said: ‘The umpire said they didn’t want to close the roof because they did not think it would rain harder. I said, “I don’t know. You take the decision. I am here to play”. 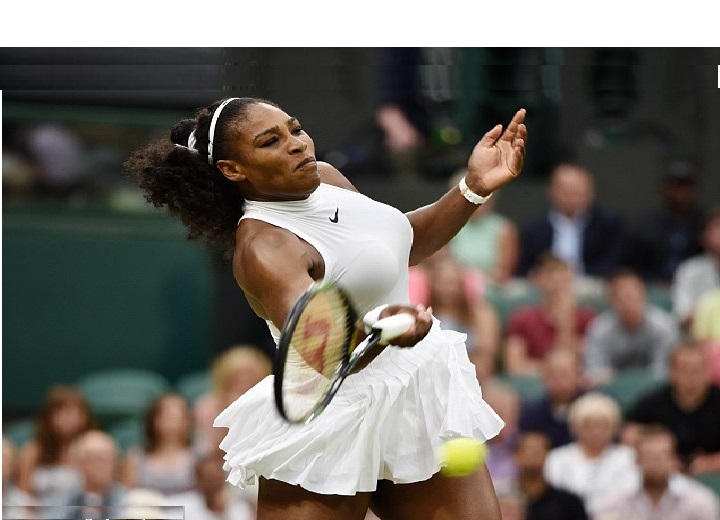 ‘They asked if I thought it was difficult to play on. I said, “Yes, it’s slippery”. It would have been better for me in terms of the match to stay out there but there was still a problem about injury.’

Away from the controversy, it was a great fourth of July for the Williams, whose combined age is 70. They are not scheduled to meet before Saturday’s final for the first time since 2009. One for the ages.

Serena, in particular, showed she is likely to get there. The ball flew off her racket like cannon fire.

‘The break gave me a little time to think and just calm down, really just relax,’ said Serena, who plays another Russian, 21st seed Anastasia Pavlyuchenkova, in the quarter-finals. ‘I talked to my coach (Patrick Mouratoglou) and that really helped me a lot. He gave me some tips. I felt like I was dialled in and focused.’

Long after her match, Serena said her comments about a lawsuit were made in ‘the heat of the moment’ and she had no intention of suing anyone. 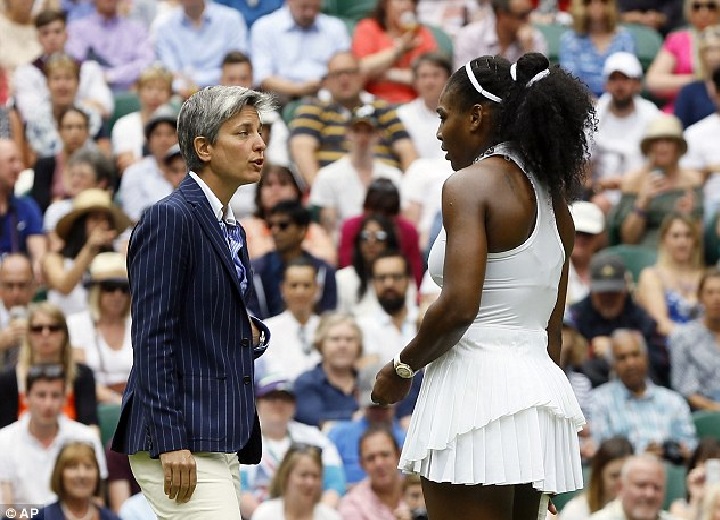 Venus’s victory, meanwhile, showed remarkable resilience no matter where her Wimbledon 2016 story ends. She has been affected by Sjogren’s Syndrome, a condition that causes exhaustion and joint pain. Her lifestyle has had to change, including a move to a vegan diet. She now plays unseeded Russian-born Kazakhstani player, Yaroslava Shvedova, for the first time. So how is Venus playing compared to 2009?

She said: ‘Let’s hope I can get to that level. Hey, that means finals time. My game now is wonderful when everything is working. I don’t focus so much on, “Oh, my gosh, everything feels good”, or, “Oh, shoot, it feels bad”. It’s about, “Can I make this play right now? If I don’t feel great, can I still make this play?” That’s the mentality I go with.’

And what about her sister, the six-time champion. Is her intensity ever a problem? ‘Well, she’s No 1 in the world,’ said Venus. ‘She’s got more majors than you can count. She’s pretty much figured it out. So if that’s working for her, don’t change anything is probably what I’d say.’