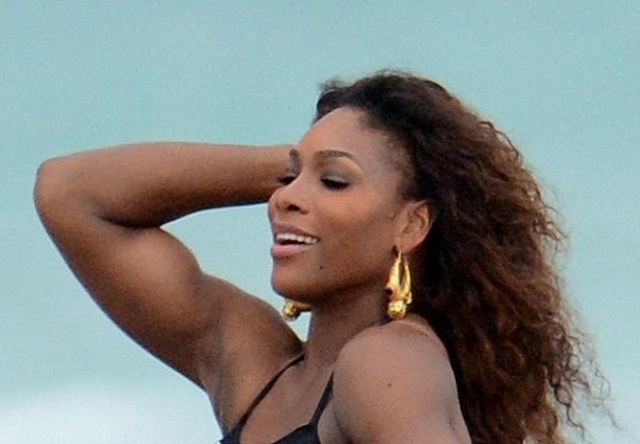 Tennis champion Serena Williams dropped the jaws of her 12.6 million Instagram followers after posting a series of photos where she showed off both her incredible physique as well as her fashion chops in a black leather mini dress.

The shirtdress featured a collar and long sleeves that emulated a classic oxford shirt. However, while an oxford might be considered prim and proper, this garment had a much edgier vibe. The hemline was incredibly short and ended at Williams’ upper thighs so that most of her toned legs were on full display. In addition, a belt cinched at her midriff to accentuate her hourglass figure. Buttons extended throughout the garment and two pockets accented the bust area.

What was arguably the most sizzling aspect of the dress was the fact that it was made from dark black leather. The color added to the bold aesthetic and was the perfect complement to her glowing skin.

Williams accessorized with a number of gold jewelry pieces, including a statement ring and dangling earrings.

what a perfect match @stuartweitzman

She styled her hair into a sleek, low ponytail with a deep side part and sported a chic red manicure.

The tennis superstar completed the look with a pair of black leather boots. They had an over the ankle-style with silver hardware that emulated the look of Doc Martens. However, Williams tagged luxe shoe designer Stuart Weitzman, suggesting the boots were from his new collection. In one of her captions, she joked they were a “perfect match” for her dress.

Williams posted three photos of the ensemble in quick succession. Though many would normally use the carousel function and combine the three pictures into one post, the fact that she made separate uploads suggests she wanted to emphasize her latest look.

In the first snap, she crossed one leg in front of the other while shyly looking down at the ground.

In the second and third shots, she leapt around in the outfit, even flashing a peek of her underwear in the final shot.

Though all three uploads were popular, the last was the clear fan favorite, earning close to 150,000 likes and more than 800 comments.