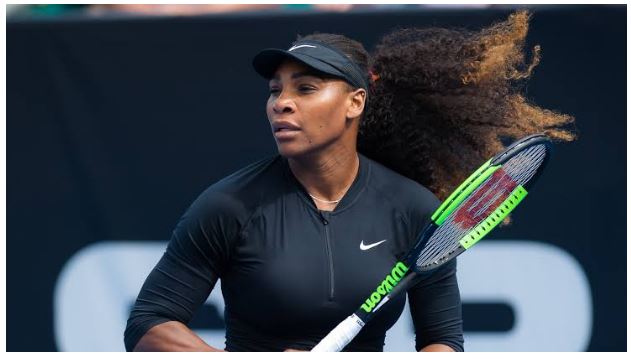 Serena Williams has responded to a challenge laid down to her by Roger Federer, in which the Swiss great asked the WTA legend to show off her volleying skills.

Not only did the 23-time Grand Slam winner respond, she did so with a very special racquet – one signed by Federer at the Hoffman Cup.

Couldn’t have done this challenge without my racquet from @rogerfederer. #tennisathome

But while Serena was responded to a Federer challenge, Catherine McNally was busy setting her own by showcasing her tweener talents.

Sloane Stephens and partner Jozy Altidore, meanwhile, took up Andy Murray’s 100-volley challenge, with the soccer player showing that it’s not just his feet he has talent in.

Kiki Bertens has revealed that she has been in training for the Mutua Madrid Open, which will be played online from April 27-30 to raise money for charity. Kristina Mladenovic, whose presence in the competition has also been confirmed, seems to have some catching up to do, though.

Thank you @MutuaMadridOpen for inviting me at your Virtual Pro Charity Event! I am delighted to be part of this great initiative! 👏🏻
( Never played before 🎮🤭😂🙈 so I will have to practice a looot!
Any advice/coaching is welcome 😃 ) https://t.co/lezCr6stuk

No social round up during this time would be complete without TikTok videos from Kristie Ahn and Heather Watson, who continue to star on the platform.

This one’s for the chair umpires who know how to handle a crowd pic.twitter.com/jZIzqcuvc7

Meanwhile, Johanna Konta and Elise Mertens have both found time to relax at home with their dogs.

Do you want to play with me? 🐶 Watch out, maybe I am not that innocent 😋 #dog #AdoptDontShop pic.twitter.com/sWV9MgV5TU

Bethanie Mattek-Sands and Naomi Osaka are both ready to trial new looks in this period of social distancing.

Ladies.. can we just come together right now and agree that root grow out is the official hot and trendy hair color of 2020? #UnityIsStrength

And Eugenie Bouchard has shown her sense of humor by providing the easiest question for your next family quiz night on Zoom.

tuesday trivia: can you guess what city i was in when this picture got taken?

Rafael Nadal Admits To Putting On Weight During Quarantine

Rafael Nadal: ‘We Have To Help Those That Are Really Struggling’