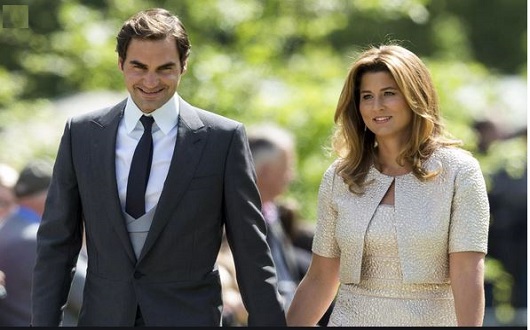 ROGER FEDERER recently clinched his 1,200th career win and could get another as he competes in the Wimbledon final, but the tennis star still maintains his biggest win was bagging his gorgeous wife. But how did the couple meet and fall in love?

Tennis player Roger Federer married the love of his life, Mirka in 2009. The Swiss tennis legend is one of the most famous names and faces in the world for his skill, but he has also melted the hearts of tennis fans around the world with his undeniable adoration for his wife. As if the couple weren’t picture perfect enough, the couple have four children – two sets of adorable twins. But how did these sweethearts meet and how did their relationship get to the point of ultimate #couplegoals?

Mirka Federer, nee Vavrinec, is a former tennis player who managed to rise to a career-high ranking of 76 in 2001, just after she had met Roger.

She was born in Slovakia, but her family emigrated to Switzerland when she was two-years-old.

When she was nine, her father took her to a tennis tournament in Germany and she met Martina Navratilova who thought she looked athletic and should try tennis.

Navratilova later sent her a racquet and arranged for her first tennis lesson.

Although, Mirka Federer was once a top-100 tennis player she retired from the game in 2002 after failing to recover from a persistent foot injury.

Since her retirement, Mirka became Federer’s public relations manager and handled much of his media affairs.

Mirka has been in the crowd for all of Federer’s greatest moments, although in recent years she has been forced to miss the occasional match due to pregnancy or looking after their children.

Federer, 37, spends much of his time away from the family home in his native Switzerland.

However, he takes his family with him insisting his four children and his wife are his top priority.

Speaking to the Sunday Times earlier this year, the sports star said changing “a ton of nappies” between matches was worth it to live his “dream” with Mirka, 40.

But he also revealed an interesting fact about his family life – that he will not sleep without wife Mirka beside him.

How did the couple meet?

The young lovebirds actually met at the 2000 Sydney Olympics.

Shockingly, Mirka was actually engaged to a rich Arab, according to Italian Magazine Gioia, but it was not long before she started dating the 20-time Grand Slam champion.

Federer once revealed the pair actually shared their first kiss on the last day of the Sydney Olympics in 2000.

When did Roger Federer and Mirka Federer marry?

The tennis sweethearts married in a small ceremony at Wenenhof Villa in Federer’s hometown Basel in April 2009.

The world champion tennis player announced on his website the couple had gotten married “surrounded by a small group of close friends and family”.

The couple announced a month before they married they were expecting their first child.

Little did they know it would turn out to be identical twin girls named Myla Rose and Charlene Riva born in 2009.

The adorable twin boys Leo and Lennard were then born in 2014.

In 2017, the double sets of twins captured the hearts of the world, when images of the seven-year-old girls and three-year-old boys cheering on their dad hit the big screens.

The two sets of twins, each dressed in matching ensembles and making cheeky faces in view of the cameras caused a huge social media buzz and intrigue about this fairytale family lives on to this day.