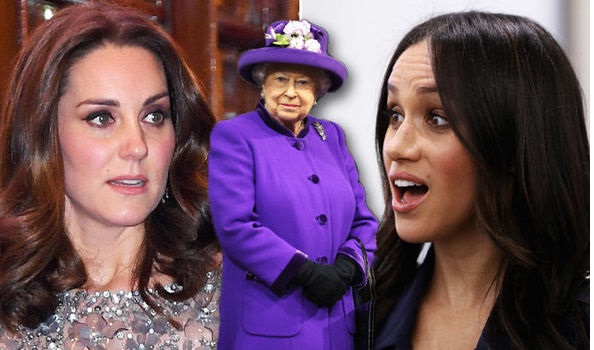 THE QUEEN has been urged to “hand over” a royal role to Kate after the Duchess dazzled at a recent public engagement.Kate, the Duchess of Cambridge visited University College London’s (UCL) Centre for Longitudinal Studies on Tuesday, October 5. The visit saw the senior member of the Royal Family meet academics who launched a “landmark” study entitled The Children of the 2020s.

The research will track the development of children from the age of nine months to five years old across England, and will examine the role of factors such as home environment and social and economic circumstances of their family on the child’s development and education.

Her visit was met with delight from many royal fans, as pictures of the Duchess arriving at UCL in Zara grey houndstooth dress – which she had previously worn to a January event – and Hugo Boss stilettos were shared across social media.

One fan in particular declared that Queen Elizabeth II should hand over one of her roles to Kate as “our girl is killing it!” User @RoyallyBlunt praised the Duchess for wearing an understated outfit to the event, citing that it aided “putting the spotlight on their [the university academic’s] activities” rather than the focus being on her.

ACU is dedicated to building a better world through higher education, and the position of patron was previously held by Meghan Markle, wife of Prince Harry prior to her exit from the Royal Family.

Meghan became patron in 2019, and she held the role until February 2021. Royal fans have praised the actions of Kate, whose husband Prince William will be king in future, citing that the patronage should now be passed on to her.

They wrote: “Our girl is killing it!
“This is how you look when you go visiting places that need you to put the spotlight on their activities. “It’s always about them. Never about her.”Other fans replied showing their enthusiasm for the Duchess’s work and her ensemble.

@KarenCambridge5 directed a snub at Kate’s sister-in-law Meghan in her tweet when she wrote: “Exactly. Someone who went to a British university not a so-called American college.”

@cadimamartins added: “I love to see HRH Catherine. Simple in a recycled but elegant black and white look, I love the shoes, a happy face and enormous sweetness.”