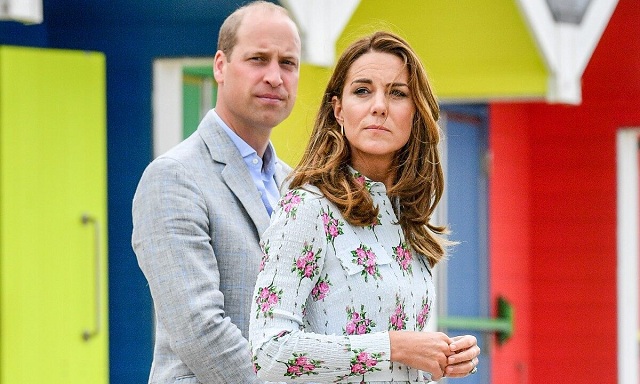 PRINCE WILLIAM was “furious” and “genuinely worried for Kate” after news of their relationship was leaked to the press, expert Rebecca England claimed in a documentary.Prince William is facing pressure like no other royal, according to royal author Robert Lacey, as the Duke of Cambridge prepares to one day become king.

Being an heir to the throne in waiting amid Prince Harry’s rift with the Royal Family and the aftermath of Prince Philip’s passing has seen William step up into a leadership role in the family, he said. Mr Lacey said last week: “Following the April death of Grandpa [Prince] Philip, William has stepped up to become one of the top three family figures, adding the ginger of youth to royal strategy. “It’s a crucial inflection point — this heir-in-waiting is under pressure like none before in recent history. “The British throne has survived beheading, exile and enough scandal to stock entire libraries. Now a new leader — William, not Charles — is paving the way forward.”The author of ‘Battle of Brothers’ made the comments in an interview with The Mirror.

William has been aware of the pressure he faces from a young age, and this led to him keeping his relationship with Kate under wraps when they first met at University in Scotland.

The story broke when Kate joined William on a family skiing holiday and the couple were spotted together on the slopes. When images of the couple appeared in the newspapers, William was said to be furious.Speaking to the 2020 Channel 5 documentary ‘William & Kate: Too Good To Be True’, royal editor at the Daily Mail Ms England explained William’s anger.The Cambridges’ relationship reportedly began in 2003, but it wasn’t made public until the following year.

She said: “Unfortunately for them, a paparazzi photographer took pictures of William and Kate clearly very close on the ski lift together.”A red top tabloid newspaper slashed it all over their front page.”William was furious, and he was also genuinely worried for Kate and her family about what this would now mean for them.”

During the interview, Rebecca also referenced claims that Kate’s mum Carole Middleton had tried to set her daughter up with the prince.She said: “At the time there were a lot of rumours going around that Carole might have tried to orchestrate the relationship by ensuring her daughter went to St Andrews. “There was talk of Kate having a poster of William on her wall at her school, Marlborough College.”During an interview in 2010, however, Kate rubbished this rumour.

William and Kate eventually made their first public appearance together at their university graduation from St Andrew’s, which was attended by the Queen, Prince Charles and Carole and Michael Middleton.Royal expert Victoria Arbiter added in the documentary: “Graduation for William and Kate, it really was their last moment in that protective bubble.

“I think perhaps they might have both been a bit naive about what was to come.”William understood how the media works but Kate would have had no idea what it meant to be on the receiving end.”The Cambridges married in 2011, and have since had their three children: Prince George, Princess Charlotte and Prince Louis.

Royal author Duncan Larcombe told The Independent in April that William and Kate still have “tension” and “rows”, but added that their commitment is stronger than ever 10 years into marriage.He said: “It’s impossible to underestimate just what an achievement this milestone represents.