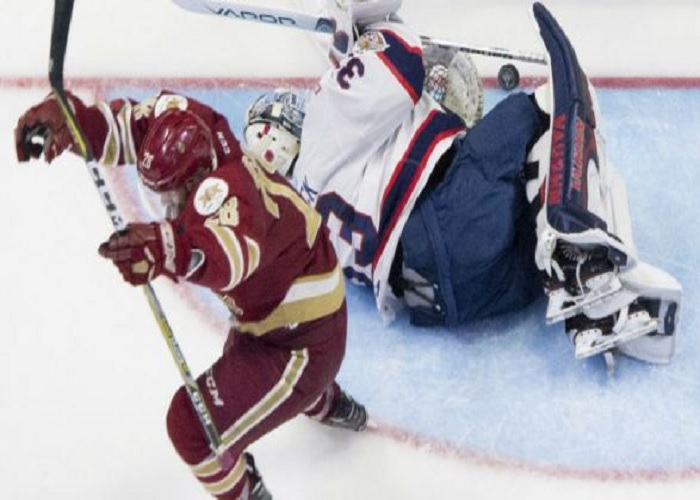 A 16-year-old prospect for the Acadie-Bathurst Titan junior hockey team died Monday after he collapsed during tryouts with the club.

Photi Sotiropoulos of the Quebec Major Junior Hockey League said Jordan Boyd felt some discomfort during a wind sprint at a rink in Bathurst, N.B.

A first responder attempted unsuccessfully to revive Boyd before he was taken by ambulance to the local hospital, where medical staff determined he had died, Sotiropoulos said.

An autopsy has been ordered to determine the cause of death.

Sotiropoulos said the youth completed a full medical evaluation and was cleared to compete by the team doctor before the training camp began.

“It’s very odd this would happen,” he said, adding there has only been one other training camp death in the league’s 30-year history.

“It was horrifying news this morning. When you find out he was just 16 years old, that I think is the most tragic part.”

He said the young man’s father was watching the workout when his son collapsed. The family declined comment through the team.

The 5-foot-11 forward is described by a former president of his minor hockey club in Halifax as a gifted player who had a bright future in the game.

Paul MacIsaac, past president of the Bedford Blues, said Boyd had improved his offensive skills during his bantam season in 2011-12.

“He was an excellent hockey player. He had quite a potential career and life in front of him,” MacIsaac said in a telephone interview.

Boyd played last year for the Rothesay Netherwood School, a private school near Saint John, N.B., where he was noticed by the Titan organization.

The league website says he was the team’s fourth-round pick and was selected 66th overall in the draft.

“It’s shocking. It’s devastating. It’s unbelievable a young and strong and healthy person on his way to chase a dream is now gone,” said MacIsaac.

“He was a big, strong kid. There were no health issues that anybody would have known of.”