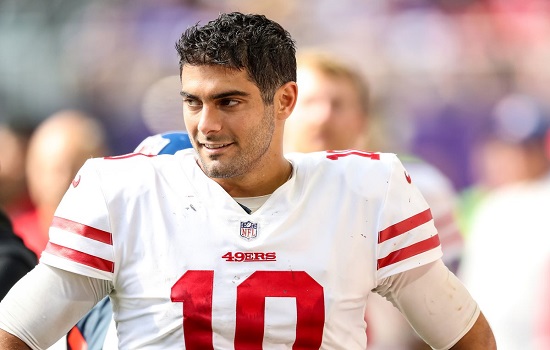 The 49ers haven’t gotten to see a lot of Jimmy Garoppolo since he arrived in 2017, but they’ve loved the little they have witnessed.

Garoppolo came to the 49ers in a midseason trade in 2017. He started the last five games of the 2017 campaign, winning all five and doing enough for San Francisco to reward him with a five-year, $137.5 million contract. Garoppolo only played in two-plus games in 2018, tearing his ACL during a Week 3 game against the Kansas City Chiefs.

Jimmy G is on track to be fully healthy to begin the 2019 season, but could this be his last campaign by The Bay?

Pro Football Talk’s Mike Florio previously has suggested the 49ers could move on from Garoppolo — perhaps for Kirk Cousins — after the season if the 27-year-old doesn’t perform well in his first full season as the 49ers’ starter. He brought the theory back up during a “Pro Football Talk Live” segment Thursday, postulating that this season could be make or break time for Garoppolo.

“After this year, that’s when it becomes much more easy for the 49ers to move on if they want to,” Florio said. “A total cap charge of $4.2 million if they would decide to cut or trade him following the completion of the 2019 season. The way the 49ers structure their contracts, they build in until April 1 to make a decision before the injury guarantee becomes full guarantee.

“So they’ll have that window of opportunity assuming Jimmy Garoppolo is healthy enough to pass a physical after the end of this season to maybe move on from Garoppolo before that guarantee vests on April 1 and ties their hands for another season. The question is: Will they do that? And that question is going to hinge on what he does this year.”

Florio then went on to explain how head coach Kyle Shanahan and general manager John Lynch might look to move on from Jimmy G in order to ensure their own survival with the franchise. All of this, of course, depends on how Garoppolo performs.

“The focal point is Garoppolo,” Florio said. “Will he earn that contract? If he doesn’t, what will the 49ers do about it? There could be a new quarterback in San Francisco as soon as 2020. Much of it depends on what Garoppolo achieves or doesn’t achieve in 2019.”

Shanahan and Lynch have raved about Garoppolo ever since he arrived, so them moving on from him after his first full season as a starter would be quite shocking.

Plus, some expect Garoppolo to lead the 49ers back toward Super Bowl contention beginning this season.