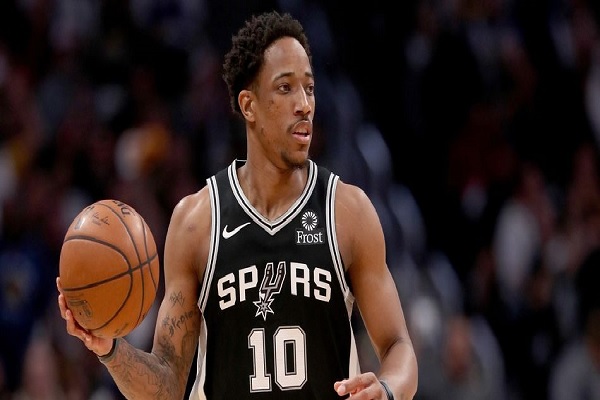 DeMar DeRozan could be staying in San Antonio for the long haul.

The Spurs are considering offering DeRozan a max deal and “have not ruled out” extending his contract, the San Antonio Express-News reported.

Coach Gregg Popovich is impressed with how DeRozan and the rest of the Spurs mesh and apparently sees DeRozan as a member of the team’s core. While the contract hasn’t been offered yet, it could come before the season starts, according to the report.

DeRozan, traded to San Antonio as part of the Kawhi Leonard deal, has two years left on the five-year, $139 million ($137.5 million guaranteed) contract he signed with the Raptors in before the 2016-17 season that includes a player option set next summer. He is set to make just more than $27.7 million the next two seasons under the current deal.

In his first season with San Antonio and 10th in the NBA, DeRozan, who turned 30 last week, averaged 21.2 points per game along with career highs in rebounds (6.0) and assists (6.2) per game.

A max contract for players with 10 or more years of service is 35 percent of the salary cap. (DeRozan isn’t eligible for a supermax deal, since he was traded by the Raptors, who drafted him in 2009.)

According to RealGM.com’s projections, DeRozan could re-sign before 2019-20 for a 10+ YOS deal that would pay him, as the salary cap grows each season, slightly more than $38 million this season to just more than $48 million in 2023-24 for a five-year total of just shy of $217 million.

DeRozan was traded last offseason from the Raptors to the Spurs, along with Jakob Poeltl and a first-round pick, for Kawhi Leonard and Danny Green.

The deal worked out for Toronto, which won its first NBA title in franchise history, though it lost the superstar to the Clippers via free agency this summer.

The Spurs (48-34) made the playoffs but fell in the first round to the Nuggets in seven games.