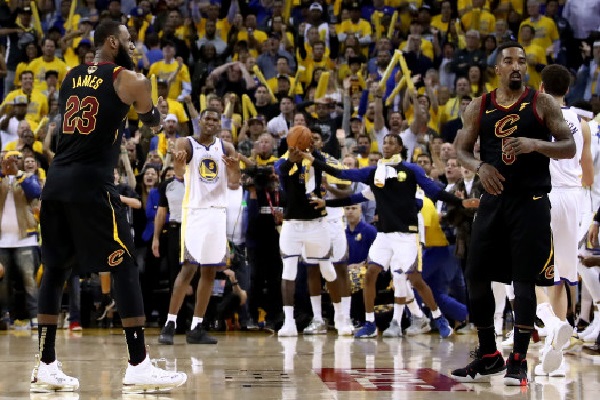 The Cavaliers have dribbled out the final seconds of JR Smith’s time with the team.

The Cavs waived Smith on Monday, according to a report from The Athletic, citing unidentified league sources.

Smith will now receive over $4.4 million, the report noted, and become a free agent after almost five seasons with the organization.

Sources: The Cleveland Cavaliers have waived JR Smith, making him a free agent. Cavs had been attempting to move Smith all the way up until the 5 p.m. ET waiver deadline today.

It ends an era in Cleveland in which Smith was part of NBA Finals teams.

His shirtless celebration of the Cavaliers’ 2016 title was among his most memorable moments – Smith opened the second half Game 7 by making three 3-pointers in the first three minutes of the second half, erasing most of a Warriors lead.

His most meme-able moment? Game 1 of the 2018 Finals, when he grabbed a rebound at the end of the game and, forgetting that the Cavs weren’t winning, dribbled out most of the final seconds of the fourth quarter. It was a gaffe followed by LeBron James yelling at him and then walking away.

Jordan Clarkson (#FormerLaker) and LeBron James combined for 55 points, but they could not get past JR Smith. pic.twitter.com/JDetNiWDDV

Smith also will be remembered for being visible on the city’s sports scene, a regular at Browns and Indians games. He even played in the celebrity softball game as part of this month’s MLB All-Star Game in Cleveland.

Now with Smith’s release, the Cavaliers will remain about $22 million over the cap, set at $109 million for the upcoming season but still under the luxury tax line of $132 million.

Talks of trading Smith began shortly after he was asked to leave the team in November, when the Cavs considered him a trade asset. Instead, they were unable to complete any deals involving him – Cleveland had hoped to get a future first-round pick – and eventually saw waiving him and staying under the luxury tax line as a benefit itself.

It allows the Cavs to stay out of the repeater tax until they are ready to be competitive again, and it also gives them financial flexibility, something they view as important during this rebuild, according to a report from cleveland.com.

Related Topics:ClevelandJR Smith
Up Next