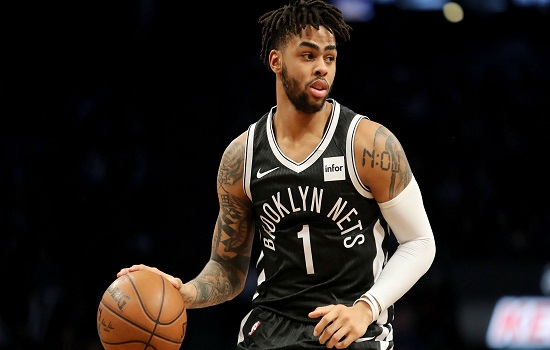 D’Angelo Russell is may be leaving The Warriors This Summer

The 23-year-old guard had been linked to the Timberwolves, Suns and Lakers, amongst others, this offseason but was acquired by Golden State in a sign-and-trade after the Nets landed Kevin Durant. Russell discussed the deal when he met with reporters during his introductory press conference Monday.

“It was a lot of surprises, just all around, throughout free agency,” Russell said, via The Athletic. “So, I think it’s just one to add to it. I knew it was an opportunity, I knew it was something that could possibly be true. We had to wait until a few other pieces did what they did.”

Russell is expected to slot into the Warriors backcourt next to star Stephen Curry next season as Klay Thompson continues to recover from the torn ACL he suffered in Game 6 of the NBA Finals against the Raptors.

D’Angelo Russell on his backcourt partnership with Steph Curry and the idea of a 3-guard lineup with Klay Thompson pic.twitter.com/smNNQwgopZ

Russell had a career year for the Nets last season, averaging 21.1 points and seven assists while shooting 36.9% from 3-point range. He made his first All-Star team, as well.

D’Angelo Russell understands his partnership with the Warriors may or may not last long term: “You put yourself in a position to go somewhere a long time and it might not be what it is a year later.” pic.twitter.com/ITdbIA99y7

Russell inked a four-year max contract, but many have speculated the Warriors may look to move him for another asset once Thompson returns healthy.

“That’s the business of it. It is what it is,” Russell said. “You put yourself in position to go somewhere for a long period of time and it may not be what it is a year later. That’s the business. I’ve come to the realization of that, I understand that. Whatever situation I’m in, I know the business side of it. We’ll just see. I can’t predict it.”

The Warriors traded Andre Iguodala to the Grizzlies in order to create salary cap space to add Russell.

NBA NEWS: Lakers To Sign DeMarcus Cousins And 6 others After Missing Out On Kawhi Leonard — See Huge Announcement…