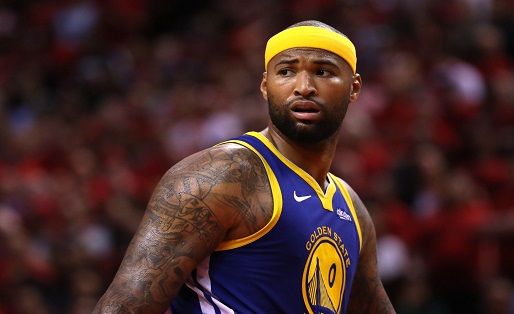 DeMarcus Cousins has been linked to a new team last Thursday. however, he still remains a free agent.

According to a report from the Washington Post, President of basketball operations Tommy Sheppard and the center “spoke briefly” recently in Las Vegas, The conversation was described as “small talk,” however the report notes it is still an “interesting development.”

The NBA summer league will be held in Las Vegas, starting Friday and running through July 15.

Cousins is one of the biggest names left unsigned, yet ESPN reported earlier this week there was “no market” for him and he has changed agents, according to the New York Times.

Cousins signed a one-year, $5.3 million deal with the Warriors last summer and missed the team’s first 45 games as he continued to recover from a torn Achilles. He finished the regular season averaging 16.3 points and 8.2 rebounds in 25.7 minutes per appearance.

Cousins also tore his left quadriceps muscle and missed most of the playoffs, although he returned for the NBA Finals, where the Warriors fell to the Raptors in six games.

“I’m getting my game right,” Cousins told The Undefeated last month. “Getting my game back. Being myself. Getting in better shape. Getting my legs underneath me. It’s going to be a good offseason for me. I’m excited about that. I look forward to going to training camp and all of that.”

The Wizards finished last season with a 32-50 record and missed the playoffs. They’re not expected to be in postseason contention in 2019-20, either.