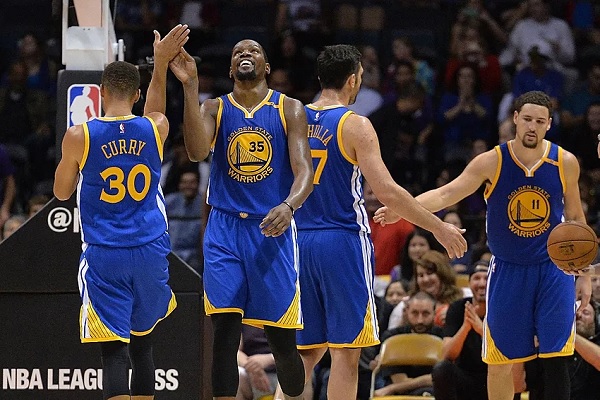 Kevin Durant joined the Nets in free agency this summer, but Golden State managed to offset that loss, somewhat, by acquiring guard D’Angelo Russell in a sign-and-trade. Kerr discussed the addition of Russell during a recent appearance on NBC Sports Bay Area’s “The Warriors Insider Podcast.”

“(Russell’s a) dynamic player in the pick-and-roll, excellent shooter and I like his in-between game,” Kerr said. “He makes a lot of plays out of the pick-and-roll. Those float shots are tough to master, and he makes those pretty routinely. So, we can do a lot of things with D’Angelo on and off the ball.”

Russell is expected to slot into the Warriors’ backcourt next to star Stephen Curry in 2019-20 as Klay Thompson continues to recover from the torn ACL he suffered in Game 6 of the NBA Finals against the Raptors.

“I’m anxious to get started with him and see how he’s going to play with Steph,” Kerr said. “We’ll probably run more pick-and-roll than we have in the past, given our change in personnel. But, I’m really excited to have him on board and can’t wait to coach him.”

Russell had a career year for the Nets last season, averaging 21.1 points and seven assists while shooting 36.9% from 3-point range. He made his first All-Star team, as well.

Russell inked a four-year max contract, but many have speculated the Warriors may look to move him for another asset once Thompson returns healthy.

“That’s the business of it. It is what it is,” Russell told reporters earlier this month, via The Athletic. “You put yourself in position to go somewhere for a long period of time and it may not be what it is a year later. That’s the business. I’ve come to the realization of that, I understand that. Whatever situation I’m in, I know the business side of it. We’ll just see. I can’t predict it.”

D’Angelo Russell understands his partnership with the Warriors may or may not last long term: “You put yourself in a position to go somewhere a long time and it might not be what it is a year later.” pic.twitter.com/ITdbIA99y7
– Anthony Slater (@anthonyVslater) July 9, 2019

The Warriors traded Andre Iguodala to the Grizzlies in order to create salary cap space to land Russell. They also signed center Willie Cauley-Stein, along with wings Alec Burks and Glenn Robinson III.