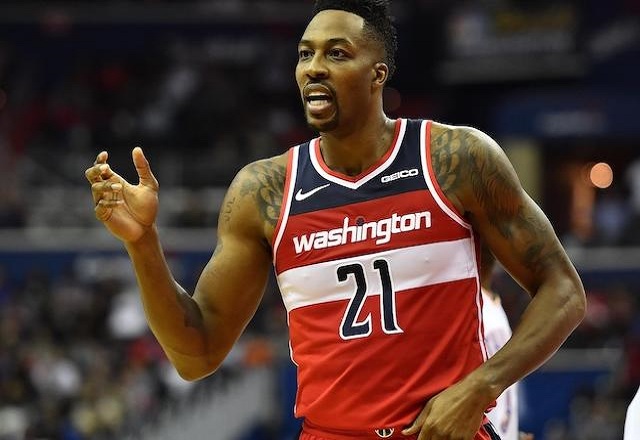 The Los Angeles Lakers are turning to a few familiar, veteran names as potential options for their thinned frontcourt.

Per ESPN’s Adrian Wojnarowski and the Los Angeles Times Tania Ganguli, the Lakers are planning individual workouts with centers Dwight Howard, Joakim Noah and Marreese Speights. Additionally, Wojnarowski reports the Lakers may also consider a workout with Marcin Gortat. Howard is currently under contract with the Memphis Grizzlies, but the team would gladly work on a buyout with him, Wojnarowski reports.

Howard is under contract with Memphis, but they’re letting him explore opportunities elsewhere. Grizzlies would gladly work on a buyout with him. https://t.co/4BQDH1Hzjm

Can confirm @wojespn’s report that the Lakers will be working out Joakim Noah, Marreese Speights and Dwight Howard as they explore options following the loss of DeMarcus Cousins.

Cousins suffered a torn ACL last week and is out indefinitely, which leaves the Lakers with Anthony Davis, JaVale McGee and LeBron James as the top frontcourt players in the rotation. The injury will almost certainly force Cousins to miss much — if not all — of the coming season. And his run of amazingly bad luck, costing him a lot of games and an enormous amount of money, would continue as well.

Shams Charania of The Athletic reported on Sunday that the Lakers were expected to request permission to speak with Howard and that Noah was also on the Lakers’ radar as well. Howard, 33, played in only nine games this past season with the Wizards due to a back injury which required surgery. He averaged 12.8 points and 9.2 rebounds while shooting 62.3 percent from the field.

Should he land with the Lakers, this would mark Howard’s second stint with the team. He played for them in the 2012-13 season via a blockbuster trade that moved him from the Orlando Magic. Howard posted solid overall numbers (17.1 ppg, 12.4 rpg, 1.4 apg, 2.4 bpg), but clashed at times with Lakers star Kobe Bryant. In the summer of 2013, Howard opted to sign with the Houston Rockets, beginning a run of seemingly regular team changes for Howard.

Noah spent 42 games with Memphis last season, averaging 7.1 ppg, 5.7 rpg and 2.1 apg in 16.5 mpg as a reserve for the Grizzlies. He was signed by the team in early December after the New York Knicks cut him last October. During Knicks training camp, Noah had been away from the team since clashing with former coach Jeff Hornacek in 2017-18, when he appeared in just seven games.

He was a valuable veteran presence for the Grizzlies last season and showed he can still provide solid off-the-bench minutes in the NBA.

Speights was a key reserve player on the Golden State Warriors’ championship team in 2015. He spent 10 seasons in the NBA, but was not in the league last season as he opted to play for the Guangzhou Long-Lions in China. In his last NBA season — the 2017-18 campaign — Speights averaged 7.7 ppg and 2.6 rpg for the Orlando Magic.

Gortat was a former teammate of Howard’s in Orlando from 2007-10 and spent part of last season with the LA Clippers. He averaged 5 ppg, 5.6 rpg and 1.4 apg in 47 games for the Clippers, but was waived by the team in early February. He has career averages of 9.9 ppg, 8 rpg and 1.1 bpg in 25.7 mpg in 12 seasons with the Magic, Wizards, Clippers and Phoenix Suns.