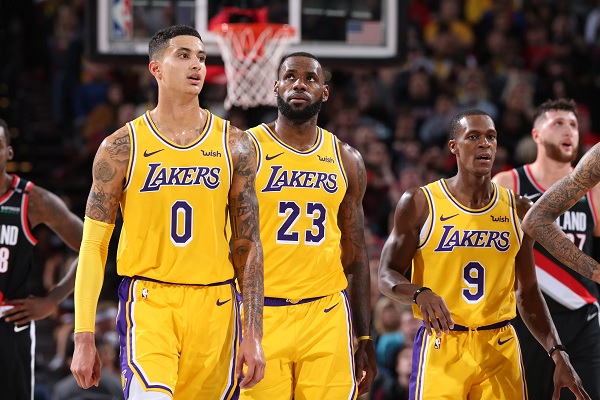 The NBA and the Los Angeles Lakers are investigating six-time all-star center DeMarcus Cousins over allegations lodged by a former girlfriend that he threatened her. The woman also alleges that Cousins has choked her previously.

The woman told police in Cousins’s hometown of Mobile, Ala., that the NBA star threatened her during a telephone conversation on Friday over whether she would allow their 7-year-old son to attend Cousins’s wedding to another woman on Saturday in Atlanta.

The Washington Post generally does not identify alleged victims of domestic abuse.

The woman recorded the phone call, which was obtained by TMZ and is the same phone conversation she provided to Mobile police, a spokeswoman told the Los Angeles Times.

After the woman responds “no, he’s not coming,” the man says, “I’m gonna make sure I put a bullet in your f—— head.”

Mobile police are investigating the incident as a misdemeanor domestic abuse case after the woman contacted them on Friday, according to multiple reports. She also is seeking a protective order against him on Monday. On the application, obtained by Deadspin, the woman claimed Cousins “choked me before.”

The NBA is “investigating the allegations,” it said in a statement released Tuesday. The league’s official definition of domestic violence includes “behavior that intimidates, manipulates, humiliates, isolates, frightens, terrorizes, coerces, threatens, injures, or places another person in fear of bodily harm,” and NBA Commissioner Adam Silver “may fine, suspend, or dismiss and disqualify” any player who violates the policy.

“We are aware of the allegation involving DeMarcus Cousins and, of course, take this claim seriously,” the Lakers said in a statement released Tuesday. “We are in the process of gathering information and will reserve further comment at this time.”

Cousins has played sparingly over the past two years. In January 2018 he suffered a torn Achilles’ tendon while playing for the New Orleans Pelicans and missed an entire calendar year before returning last season with the Golden State Warriors. In July, he signed a one-year contract with the Los Angeles Lakers, though he’s expected to miss the upcoming season because of a torn ACL he suffered during a pickup game this month.