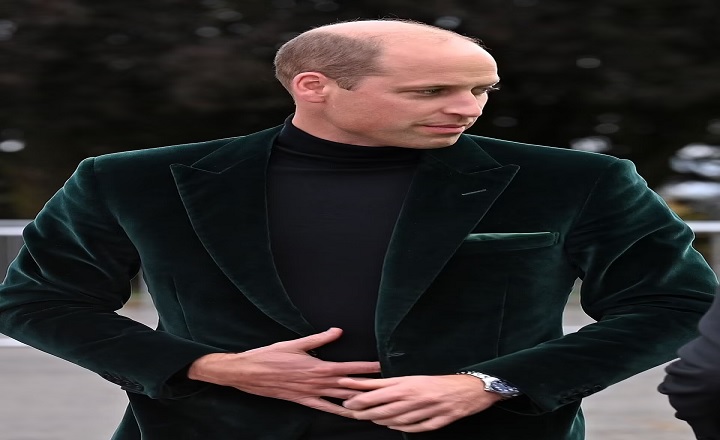 Prince William and Kate Middleton’s ‘understated professionalism’ at last night’s Earthshot Awards was a ‘masterclass of regal behaviour’ and showed a contrast to Prince Harry and Meghan Markle’s ‘rock star-like’ appearances at recent events, a body language expert has claimed.

The Duke and Duchess of Cambridge, both 39, walked side-by-side as they headed into the star-studded Earthshot Awards at Alexandra Palace in London last night. 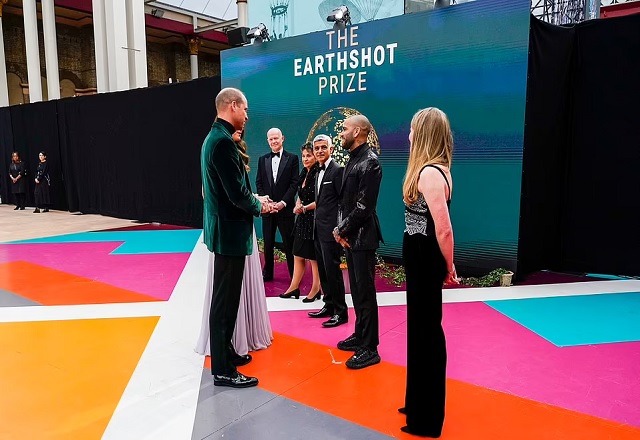 Speaking exclusively to FEMAIL, body language expert Judi James revealed how the couple showed they are approachable, while they also seemed ‘in awe’ of David Attenborough as they rubbed shoulders with A-listers.

The couple showed ‘modesty’ while avoiding ‘showboating’ and celebrity-style ‘PDAs’ during the green carpet, Judi explained. ‘Their speeches on stage were performed separately rather than as an A-list double-act and they both delivered professionally, pointing focus towards their cause rather than themselves and the injection of subtle glamour they brought to the evening,’ Judi told FEMAIL.

‘William’s understated professionalism was in contrast to his brother’s recent stage appearances that have involved much more of a rock-star-style revving up of the crowd and celebrity approach. William and Kate’s appearance was in stark contrast to Harry and Meghan’s at Global Citizen Live last month.

The Duke and Duchess of Sussex, 37 and 40, appeared on stage at ‘Wokestock’ in Central Park, New York, last month, to a loud cheers and called on everyone to work together to end the COVID-19 pandemic.

‘Harry and William did share one trait though. ‘As he arrived at the venue looking dashing in his velvet jacket William used a ‘paperclip’ gesture, pushing some of his fingers inside his jacket at waist level to hold it together while some of the fingers stayed outside.

‘This is an identical self-comfort barrier gesture to Harry’s.’A small sign of nerves on an otherwise competent night. ‘None of our royals do equality like Kate and William,’ Judi went on. 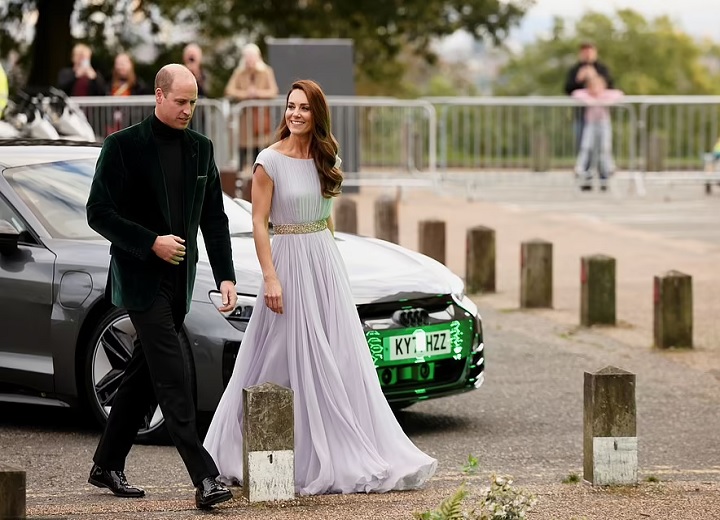 ‘Their sweeping arrival showed both walking empty-handed with their arms down at their sides and both posed with hands clasped in front of their torsos in a display of mirroring and synchronicity.

‘William’s “Ok!” as they turned to pose for the cameras came with a small rise to his toes and down again to brace himself and it was Kate who copied her husband’s hand clasp or “fig leaf” pose to project the look of royal peas in the pod.

During the ceremony, Prince William warned that we live in ‘the most consequential time in human history’ as he channelled his inner 007 wearing a trendy velvet jacket. 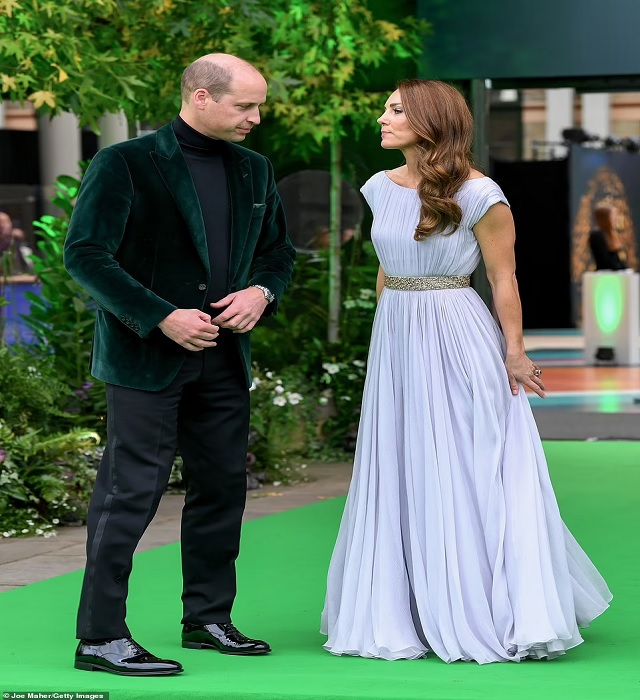 Following a performance by Coldplay and Korean boy band BTS, powered by 60 people pedalling bicycles, William gave a stark warning that ‘time is running out’ to tackle climate change, adding: ‘The actions we choose or choose not to take in the next 10 years will determine the fate of the planet for the next thousand.

Prior to the ceremony, the walked down the green carpet where they met celebrities. ‘Their body language from then on blended “royal” with signals of modesty and approachability,’ Judi explained.

‘Kate clutched both of Emma Thompson’s wrists as they chatted and although Attenborough was seen bowing to the couple their facial expressions suggested they were in awe of him’. 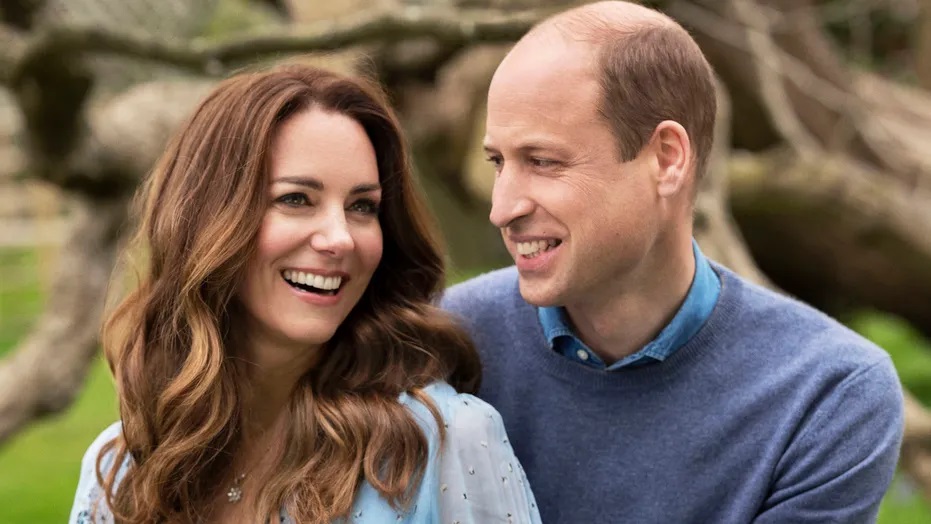 Despite their ease of movement and grace there were some nerves, according to Judi, who said William showed ‘small signs of nerves’ ‘It looked from their delivery and gesticulation as though Kate and William had been having coaching from the same person or team as they spoke holding their hands high (a trait that Attenborough uses) to show emphasis and passion and with a selection of cupped hands to illustrate the protection of the Earth, precision gestures to signal how precise their involvement and research has been and a throwing out of the hands to motivate global involvement.

‘Both used both hands equally in these gesticulations, showing complete belief in their messages.’As a couple, the Cambridges were like the swan gliding across the water with the legs kicking hard beneath the surface.

‘Many of their glances and whispered asides looked like tie-signs, i.e. a subtle exchange of messages to support each other equally during the event. 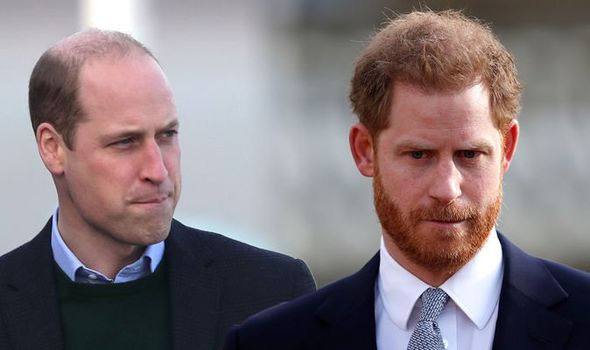 ‘Sitting together watching the show it was clear they relaxed and enjoyed much of it though, with Kate’s perfect royal smile dissolving into the nose-wrinkled grin of authentic laughter she uses when she’s having fun and William even calling out approval of some of the acts.

11 most overwhelming photos of Serena Williams