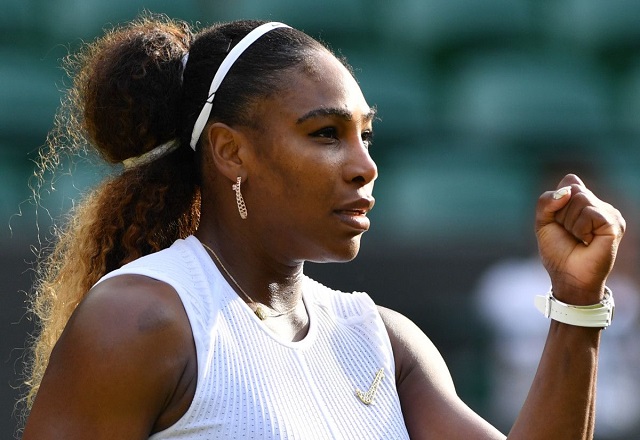 Serena Williams seems to exude body confidence from every fiber of her being. Seriously, does it come from her pores? Despite being a fantastic role model for women, she doesn’t always feel that way. In fact, she feels unconfident in her body more often than not.

“Unless I’m eating really healthy,” Serena explained to Fitness Magazine,”I feel [less than confident] almost every other week.” The four-time Olympic gold tennis champion confessed that there are plenty of times when she wishes she could “do better” or “be smaller.” She pointed to the way women are taught to look as the reason for these feelings.

Still, Williams has adopted a healthier lifestyle, but not necessarily to get skinnier — it was for her former roommate. “It all started because I didn’t want to bring bad food into the house. I live with my sister, Venus, who has Sjögren’s syndrome, an autoimmune disease,” Williams candidly told the magazine. Williams also found out that she is allergic to wheat, prompting her to adopt a new style of eating. So, just what does a typical menu look like for this tennis star? Keep on reading. As part of her initiative to eat healthier, Williams said she’s “trying to eat a clean diet of natural, raw foods.” Nevertheless, she finds it difficult to wake up early and scarf down a healthy breakfast. In a Vanity Fair profile of Williams, the tennis star is described as “not a morning person” and one that “usually doesn’t eat breakfast.”

The night before Williams’ first match at the Italian Open, however, was a different story. Williams was actually going to try the breakfast buffet at the Cavalieri hotel in Rome. Can you blame her? Unfortunately for the tennis star, the buffet closed just five minutes before she sat down. But, in a twist of fate, Williams ended up choosing a table beside the pool to order a sit-down meal. This is where Williams would meet her eventual husband and father of her child, Alexis Ohanian. Aww. Williams must be thankful that she was in the mood for breakfast that morning. Just as Williams finds it difficult to eat breakfast, she also struggles with eating before a match. When asked about her pre-match go-to grub, Williams revealed the truth to Glamour, saying, “Usually I can’t [eat]. And I haven’t been able to figure out why — it must be nerves!”

In her last match prior to her interview with the magazine, she explained that she did choke back “some turkey sausage and a baked potato” before competing. If you’re wondering if Williams opts for turkey sausage because it’s regarded as healthier, that might not necessarily be the determining factor for the tennis star. “I’m not really into pork,” Williams later added.

Although she finds eating before a match hard to do, she appreciates the power of the all-important combo: protein and carbs. When she is successful at convincing herself to eat before competing, this is the formula she tries to follow. “Tries” being the operative word, of course. Williams may sometimes opt for animal protein, but she’s also begun embracing veganism. Well, perhaps pseudo-veganism. After having a baby, Williams told The New York Times that she wanted to “lean out” and, in doing so, knew she had to eat healthier. “I went vegan for 44 days,” said Williams. Because it worked so well for her, she decided to try it again. She clarified, saying, “But now, I’m vega-tarian.” Williams explained how she loves European cheeses and, since she planned to head to Europe soon, she decided she’ll indulge in the dairy product and explore the middle ground between being a vegetarian and a vegan.

Williams’ sister has also started following a loosely vegan diet. “Venus calls us ‘chegan’ — because we cheat with a little bit of fish and chicken,” Williams told Bon Appétit. Williams didn’t always appreciate a plant-based diet, though. “For me, green’ used to mean ‘yuck.’ But I’ve incorporated a lot of raw things in my diet this year,” she said. Williams may be a mostly-vegetarian and an overall healthy eater, but that doesn’t mean she’s going to give up her favorite foods. When speaking to Fitness Magazine, Williams put it simply, saying, “I love Southern food.” Williams loves it so much that she says she doesn’t even attempt to eat healthy when in South Carolina for the Family Circle Cup tournament. And when she says she doesn’t try, she really, really means that.

“I eat shrimp and grits with butter on top, fried chicken, and, oh, do I eat the fried hush puppies! And the banana pudding — mmm, mmm, mmm! I let myself go that whole week and then another week after that,” Williams detailed.

While that kind of diet sounds amazing, quite frankly, it’s certainly worth remembering that Williams works out insanely hard, with tennis matches lasting for hours at a time. And even so, she said she “can’t take cheat days too often because [her] cheat days are usually cheat months!” We feel you, Serena.

Serena Williams Eats pizza as a Celebratory — hold the pepperoni Even though Williams has a hard time eating before a match, the same does not apply as soon as the match is finished. And if she happens to win said match, the meal she chooses may be a little less than healthy. Pizza, for instance, is her preferred celebratory meal. She’s not usually one for fancy toppings and instead specified to Glamour that she likes to eat it plain — “just cheese.” Williams’ favorite pizza comes from Bella Vita, a pizzeria based out of, you guessed it, New York.

Williams may try to limit her cheat days to when she’s visiting the southern states, but she still finds a way to eat things that many would consider to be far from diet-friendly. “I had fries with lunch today,” Williams admitted. Although, she did make it a point not to eat them all. “But I’m not going to deprive myself,” she clarified. You do you, girl! As a sometimes-vegetarian, sometimes-not, Williams still eats chicken on the reg. Her mom’s “chicken, with rice and gravy” is William’s favorite dish — and has been since she was a young child. Even as an adult, she asks her mom to make up a batch for her. “I was just competing in Australia, and she was going to make it for me, but she forgot. Now she owes me!” Williams told Bon Appétit.

The tennis superstar also has her own roast chicken recipe. “I make it French style,” she explained. Williams uses whole garlic cloves, placing some under the skin and inside the chicken. “I put butter on top of the bird, and butter inside the gut,” Williams said, revealing her recipe. She clarified, saying, “It’s not a light dish!” With a little salt and pepper, baby onions, and olive oil, Williams roasts the chicken. Vegan or not, it sounds delicious! Roasted chicken dinners are not the only thing Williams cooks. “For years, I was always making gumbo for everyone,” she told Bon Appétit. Then she started making “seven-bean delight.” Williams came clean and said that it actually only has five beans. “But don’t tell,” she joked. For a while, turkey tacos were her go-to, but now as she transitions to a more vegan-centric diet, she makes “vegan sushi.”

Williams told of her love of cooking, which she feels she got from her family. “I grew up watching my mom in the kitchen, that’s how I know anything about cooking,” said Williams. Despite being a world-renowned athlete, culinary classes are something she’s always been interested in taking up. For now, though, the star learns from watching her mom and celebrity chefs, like Emeril Lagassé, Bobby Flay, Masaharu Morimoto. “That guy is awesome,” Williams remarked. Imagine being called awesome by none other than Serena Williams? Life goals. Williams keeps a well-stocked and healthy fridge. Mostly all vegan, Williams told Bon Appétit that you’d find “coconut water, Gatorade ([her] favorite!), cucumbers, mint, kale, vegetables, ginger, and wheat grass” if you were to peer inside. There are a few things you’ll never, ever see Williams eating though.

“I hate avocados,” the champion admitted. What? Serena, no! “The texture is so yucky in my mouth,” she explained. Okay, maybe we’ll give her a free pass. Williams listed off several other foods she’s not a fan of, including tomatoes. If diced into small pieces, Williams says she “can get them down.” Eating tomatoes is obviously not the most enjoyable experience for her.

Despite liking the majority of Japanese food, Williams said there’s one Japanese cuisine she just can’t handle. “I can’t do those fish eggs that are really fat, big, and orange. I don’t like those,” she added. Wait — does this mean there are people who do actually like eating those?

Serena Williams is a tacoholic Serena Williams is a tacoholic

For being the driven and dedicated super-fit athlete we all know and love, Williams has proven that even she has to find the balance between eating healthy and eating not so healthy. She also battles food cravings — on the daily.

“I want tacos. Everyday I want tacos,” Williams wrote in a Facebook post, “I don’t know what to do? Is there help for someone that wants to eat tacos everyday?” While the first step may be to admit you have a problem, Tacoholics Anonymous isn’t yet a thing. Williams explained why she’s so obsessed with the food to USA Today, saying, “I grew up next to all of these Mexican families and we were close with them when I was little, we were friends. I think that’s where my love for tacos comes from.” Williams also claims to make the best tacos, but joked, saying, “I don’t taco about it.”

With Serena Williams’ otherwise healthy eating plan, you probably don’t have to worry about her taco addiction too much. Besides, it’s nacho problem.

SHOCKING REVELATION — This One secret Thing Serena Williams Does Before Every Match: SEE STORY INSIDE.

EXCLUSIVE — What Serena Williams Eats For Breakfast, Lunch, And Dinner — SEE PHOTOS INSIDE