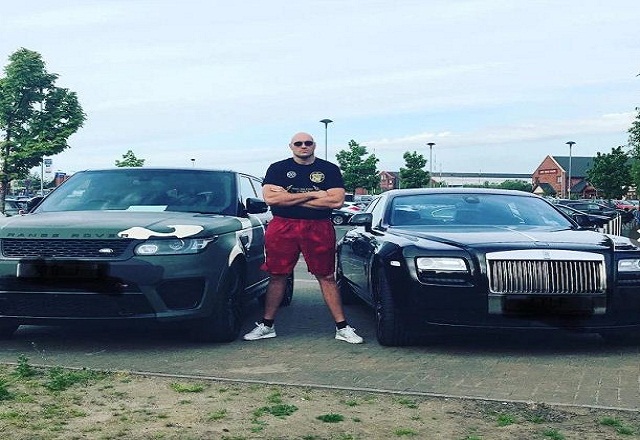 FROM being skint to signing a deal worth £80million, Tyson Fury has gone from rags to riches more than once.

The Versace-wearing, Ferrari-driving heavyweight boxer returns to the ring in Las Vegas on Saturday to face underdog German Tom Schwarz. Fury, 30, has hired out a giant mansion in Sin City’s suburbs just 12 months on from claiming to be “skint”.

Just after signing an £80m TV deal with ESPN earlier this year, the self-appointed lineal champion of the world is back in the big time.

And he is a heavyweight spender, as Fury loves his mega-money motors to and designer wardrobe.
Rollers and Ferraris

From Rolls Royce to personalised Range Rovers, Fury has a clear love for luxury motors.

The Italian wheels were added to his car collection after forking out £282,000 on a brand-new Rolls Royce Dawn last year.

Fury’s return to the ring that year also saw him buy a Range Rover Sport SVR, as well as a £240,000 Ferrari GTC4 Lusso. Showing off the Roller on Instagram, Fury wrote: “When hard work and talent pays off.

“Washed in the blood of the lamb. Reaping the rewards of my glory.”

Fury has had a variety of Range Rovers, in white, grey and camouflage, which he personalised.

One was changed to have Scottish tan leather, a quilted diamond stitched pattern and personalised ‘Fury’ labels.
From caravan to Marbs mansion

When it comes to homes, Fury’s eclectic mix includes a caravan, a modest house in Morecambe and a Spanish mansion.

Despite growing up in a house, Fury has regularly lived in caravans.

When he began dating childhood sweetheart Paris aged 17, now his wife and mother to his five kids, Fury slept in a caravan outside her parents’ house.

In the build-up to his 2015 world title fight with Wladimir Klitschko, Fury and his modest team stayed in caravans for the training camp. But Fury now spends most of his time living with Paris in their family home that overlooks Morecambe Bay.

The property has gradually been extended with the fighter reportedly spending £500k on converting it.

It is here that Fury does the school run with their kids Valencia Amber, Prince John James, Venezuela and Prince Tyson Fury II. And then there’s the mystery Marbella mansion that looks more like a small castle.

Properties of this size in the popular Spanish holiday destination go for an average of £6m.

While Fury has never shown any more images of the house, he said at the time: “New house had to treat myself. Been a long time coming.”

From a Muhammad Ali suit to a Batman outfit, Fury has a wacky wardrobe.

But the heavyweight is a clear fan of the designer labels, from Louis Vuitton to Gianni Versace.

During a recent interview, ahead of his fight with Schwarz, Fury wore a giant red Versace robe while in his rented Las Vegas mansion.

And it is the designer labels that tend to catch the boxer’s eye.

Fury often posts images to his social media accounts of his Louis Vuitton collections and Versace suits and dressing gowns.

And Fury once wagered his gold, diamond-encrusted Rolex watch to whoever could beat him in the ring.

One outfit caused controversy two years ago when he wore a £9,000 chinchilla fur coat – more than 200 chinchillas are killed to create a single coat. Helping hand to others

Fury describes himself as “the people’s champion” – and that’s reflected in the charitable work he claims to have done.

His blockbuster clash with Deontay Wilder last year saw Fury pick up £7m from the purse, all of which he says was given to homeless charities in the UK.

He said: “When I go home I’m going to build some homes for the homeless and set up some funds for drug addicts and alcoholics.

“I was always going to do it but being here (in California) gives me that extra push to go and do it even more.” And before the bout, Fury was seen walking around LA without shoes on.

Fury revealed: “What happened was, we were in Starbucks having a coffee minding our own business just looking out the window and there was this old fella outside no shoes on him – one shoe off, one foot bleeding.

“Everyone was looking at him like ‘get rid of him,’ he walked off and I thought that’s somebody’s child, that’s a human being.

“As he walked off through the crowd I heard somebody say to me, ‘give him your shoes, go and give him them shoes on your feet,’ I was like ‘yeah’.”

In 2016, England fans in Paris benefited from Fury’s charitable side. Team Tyson get him in shape

When Fury shed 10 stone in just nine weeks, his trainer Ben Davison got the credit.

But the fighter also hired his own personal chef to prepare meals as he aimed to cut out the lager, kebabs and chocolate that saw him balloon.

Chef Tim Allcock pumped Fury full of a protein-packed diet, with peanut butter chicken a particular favourite, that saw the pounds fall off.

Allcock’s work was also supported by Greg Marriott, a nutritionist hired by Fury.

Between the two of them, they got Fury onto a diet that will help him prepare for world title fights.

Egg and bacon may remain on the breakfast menu but there’s plenty of avocados, nuts, cheese, fish and meats, plus a stir fry was a favourite addition.

But pasta, cereal, rice, beans and lentils and most fruits are strictly banned.

Just In: Tyson Fury Angrily Revealed He Would Beat Andy Ruiz Jr With One Hand Tied Behind His Back–See Full Details