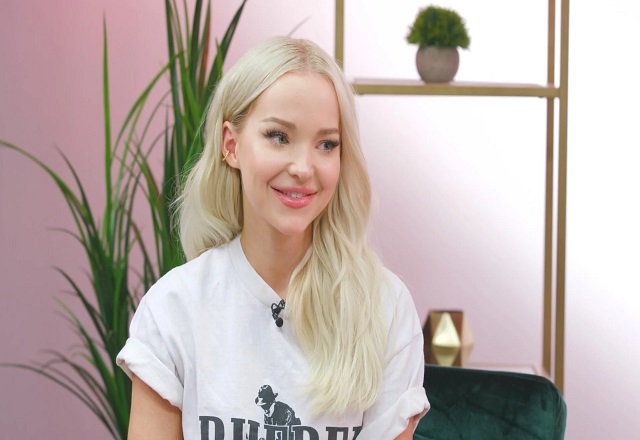 Dove Cameron just set a new standard for sheer underwear, and then deleted the whole thing. The 24-year-old actress and singer, not one to go cheap, just dropped jaws on her Instagram, with a photo promoting her upcoming “We Belong” music video coming ethereal, goddess-like, and definitely not seedy.

The “Descendants” actress, fresh from teasing the “We Belong” music video, updated for her 37.9 million followers with a still from the video. The snap was bedroom-set and sultry, but Dove exuded elegance in every way. Check it out below.

Scroll for the photo that didn’t last long. Dove, who signed with Columbia’s DIsruptor Records in 2018 and has openly stated she felt her former Disney days limited her music career, is now running her own gig.

“We Belong,” which sees Dove twirling around barefoot in a semi-sheer strapless dress, is everything a gorgeous music video should be, and the photos match.

Dove’s Sunday photo showed her shot in semi-profile and with sunlight steaming over her. The green bed setting contrasted whites on the blonde, with the look sensual and feminine.

Dove, snapped with closed eyes and looking downwards, highlighted her slender frame in a sheer-paneled and embellished lace bustier, also wearing a matching skirt and showing hints of her bare midriff.

A date caption was the only addition as Dove alerted fans to the December 8 release date for the video. Over 100,000 likes poured in over the first 20 minutes – fans don’t hang around with this girl.

“Epic. Stunning!” one wrote, with another saying: “These photos.” More after the shot.

Related Topics:Dove Cameron
Up Next