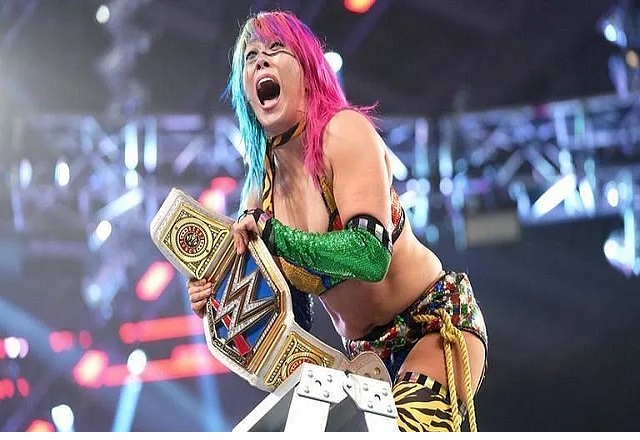 Asuka will come charging into WWE with a rich profusion of momentum that many new arrivals couldn’t even imagine.

The company doesn’t have a great batting average when it comes to introducing fresh Superstars. We’ve seen many a hot NXT act grow icy once they move to the main roster.

Asuka is poised to buck that trend when she makes her Raw brand debut at the TLC: Tables, Ladders & Chairs pay-per-view on Sunday.

WWE has perfected the art of hype when it comes to The Empress of Tomorrow.

There will be an air of eminence surrounding her when she faces Emma. Buzz will hum around the head-kicking warrior.

That hasn’t been true for a number of recent NXT draftees and free agents.

The surprise debut route has been WWE’s go-to for a long time. Tye Dillinger, Bobby Roode and Mike Kanellis all popped up unannounced.

While that makes for a fun moment, it leaves a portion of the audience out. Plenty of fans don’t follow NXT.

Just throwing these guys out there without introducing them to the casual fan doesn’t give them the running start Asuka has.

Well-produced vignettes have teased her Raw debut for weeks. These clips have worked to create mystique, to generate hype and anticipation.

WWE has also done a good job making her feel like a big deal by treating her like a truly special acquisition.

Asuka will debut at a PPV rather than on TV, and the company booked a Fatal-5 Way match to decide who would get the chance to take on the former NXT women’s champ. We don’t normally see the red carpet rolled out like this.

Asuka also has the advantage of walking into Raw undefeated.

She fended off opponent after opponent at NXT. She held NXT Women’s Championship for a record 523 days, with her reign lasting longer than Charlotte Flair and Sasha Banks’ combined.

That immediately establishes her as a fearsome force, a gladiator and a contender.

Dillinger and Kanellis didn’t have that going for them. The Perfect 10 came in as the guy who struggled to win his biggest matches at NXT.

Kanellis showed up 0-0 in the WWE realm and lost regularly during the last days of his Impact Wrestling stint.

Emma has generally been a lower-card star, but she’s only a month removed from battling for the Raw Women’s Championship at No Mercy.

She’s also sure to give Asuka a memorable fight. The two grapplers showed off great chemistry in their 2015 bout in London.

Critics loved that NXT TakeOver clash. Kurt Zamora of TJRWrestling.net wrote of it: “Wow, that was tremendous.”

That’s something that simply didn’t happen with several recent arrivals.

Aside from his entry into the Royal Rumble, Dillinger’s first main-roster outing was a forgettable showdown with Aiden English on SmackDown. Kanellis started out with a so-so showing against Sami Zayn. Roode went the Dillinger route and squashed English.

More importantly, WWE has been hit and miss in the early stages of those Superstars’ runs on the main roster.

They have come off as ordinary, mortal midcard fodder. Dillinger didn’t get a sustained storyline for a long time.

Roode has been mired in a lifeless feud with Dolph Ziggler. WWE has even struggled to get the charisma machine Shinsuke Nakamura going.

Asuka is set to be different.

“The thing with Ronda is, you never know what she is saying.- WWE Superstar reveal